Amusan gets WR, then the gold, in superfast 100 hurdles 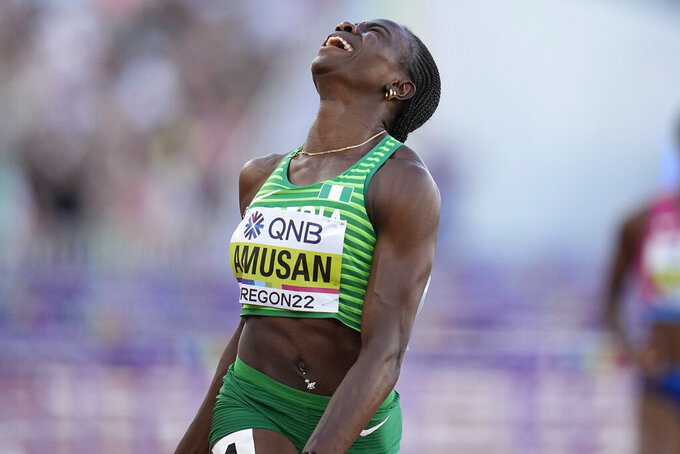 EUGENE, Ore. (AP) — Nigeria’s Tobi Amusan set a world record in the semifinals, then ran an even faster, wind-aided time in the final Sunday to take the gold medal in the 100-meter hurdles at world championships.

The record time of 12.12 seconds came on the first race of the final evening, one of three semifinals that set up the eight-woman gold-medal race.

About 90 minutes later, she ran 12.06 to beat Jamaica's Britany Anderson by 0.17. That time is not a record because she had a 2.5 meter-per-second wind behind her, which is .5 over the legal limit. The wind on the record setter was 0.9.

The 25-year-old, who finished fourth at last year’s Olympics and fourth at worlds in 2019, broke the six-year-old record of 12.20 seconds held by Keni Harrison, who was in the same semifinal heat and finished second.

“She’s been fourth twice. I know it’s not an easy position,” said her friend, Danielle Williams of Jamaica, who finished sixth. "She’s been close to throwing (in) the towel. To see her come out here and do this right now, it’s amazing.”

In 2016, Harrison also broke the record under unusual circumstances — in London, a week before the Olympics started after she had failed to qualify for the U.S. team heading to Rio de Janeiro.

Hers was the first gold medal for the Nigerian team in a meet that has been dominated by the Americans.

Athing Mu won the women's 800 meters to give the U.S. its 29th medal of these games, one short of tying the record for most at one world championships.

Later in the night, the Americans were favored to win both the men's and women's 4x400s, with 400 hurdles world-record holder Sydney McLaughlin running the anchor leg for the women.