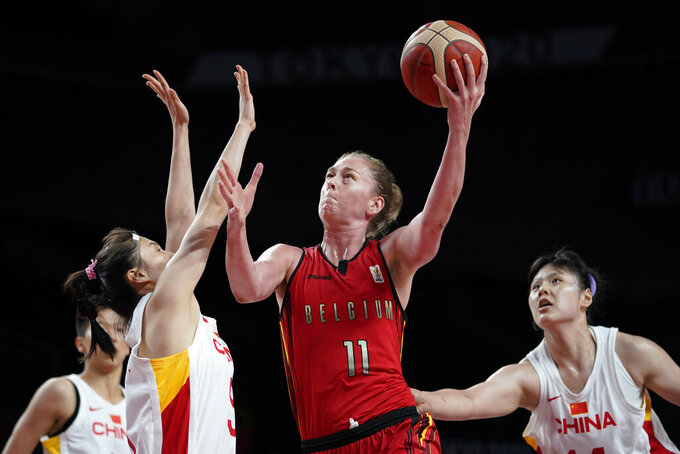 Han Xu feels much more comfortable in her second WNBA stint with the New York Liberty.

The 6-foot-10 center from China missed the last two WNBA seasons. She stayed in China amid COVID-19 lockdowns and training for the Olympics. Now the 22-year-old Han is back in New York after growing an inch.

Han feels more ready to play in the WNBA and is one of 21 international players on opening day rosters from countries all over the globe, including Australia, Belgium, Canada and Japan.

“During the past few years, she gained a lot of confidence and now is trying not to be in her head when she plays basketball,” Han said via interpreter. “Just be confident in her ability to play.”

Han played for China in the Olympics last summer and averaged 9.5 points and 7.5 rebounds in just 15 minutes a game.

“During the Olympics, she saw what the best players in the world are and how they play and she realized she has a lot of potential and space to grow," Han's interpreter explained. "She's definitely going to work even harder this year to get on that level.”

Han's improved play has impressed her teammates and coaches. During one stretch in practice, she finished off three straight plays on offense with a hook, putback and layup.

First-year Liberty coach Sandy Brondello has seen Han play many times overseas with China and is happy to have her back in New York.

“She's really talented and is getting better every day,” Brondello said.

When she's not on the court, Han makes the short trip to Chinatown at least once a week to eat and feel more at home.

“It helps her get more used to the life here and New York City,” Han said through her interpreter.

Some other international players who will be key to their team's success:

Machida helped Japan win an Olympic silver medal last summer. The 29-year-old averaged 7.2 points and 12.5 assists at the Tokyo Games. There will be a lot of interest in how she fares in the WNBA; there were nearly 80 media members at her introductory news conference.

At “this age, you know, I’m 29, so I really feel like I needed to move on, go ahead and play in different (league) in WNBA,” Machida said through an interpreter. “So this is the best opportunity, the best moment, and … this is going to be the best experience I’ve had for sure.”

The league's reigning MVP has been a major reason for the Sun's success over the past few years. She returned to the U.S. earlier than usual this offseason after all the WNBA players left Russia because of the country's invasion of Ukraine. Jones averaged 19.4 points, 11.2 rebounds, 2.8 assists 1.3 steals and 1.3 blocks en route to the MVP.

“She is one of the most versatile and talented players in the world,” Connecticut coach and general manager Curt Miller said. “She has a burning desire to improve, and we look forward to building upon the momentum of her MVP season.”

Unlike Han and Machida, Cambage has already made her mark in the WNBA. She was drafted second in 2011 behind Maya Moore and holds the record for most points in a game. She scored 53 against New York in 2018 as a member with Dallas. The Australian decided to leave Las Vegas this offseason as a free agent and now plays with the Los Angeles Sparks.

“It was L.A. or out for me,” Cambage said. “There was nowhere else I wanted to be. Growing up, everyone told me to watch Shaq play, but I was too busy watching Kobe.

“Adding (Meeseman) takes us to a whole other level,” Chicago guard Courtney Vandersloot said last month. “She can fit anywhere she goes. Of course, there’s going to be a learning curve figuring out how she fits. ... We have our core back, and now we’re adding this super piece to it. I expect us to play good basketball this year.”