Column: Izzy's long run as worst Olympic mascot is over 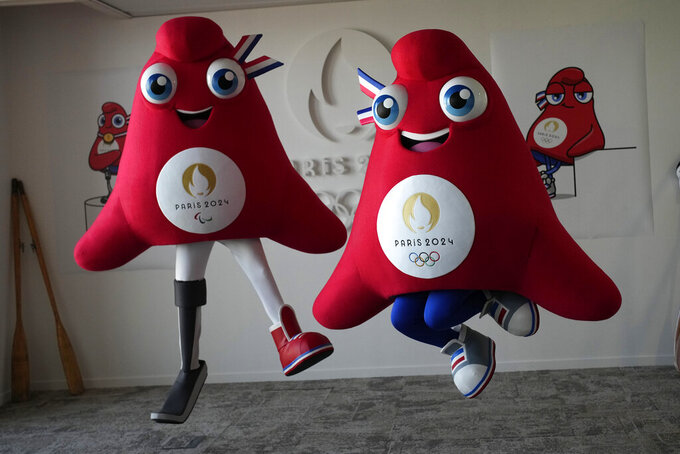 FILE - Mascots of the 2024 Paris Olympic Games, right, and Paralympics Games, a Phrygian cap, jump during a preview in Saint Denis, outside Paris, on Thursday, Nov. 10, 2022. Izzy, the much-hated blob that represented the 1996 Atlanta Games has been supplanted by the mascot for the Paris Olympics — a Phrygian cap. (AP Photo/Christophe Ena, File) 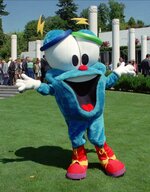 Your 26-year reign as the worst Olympic mascot is over.

The much-despised, often-ridiculed, computer-generated blob from the 1996 Atlanta Games has been toppled as the G.O.A.T. (Grossest Of All Time) by a ... well, we're not quite sure what it's supposed to be.

A French version of Gumby? (Where's Eddie Murphy when you need him?)

After a further bit of research, we discover the mascot for the 2024 Paris Olympics is a hat known as a Phryge, which would be great if they were staging “Les Misérables” instead of the world's grandest sporting event in two years' time.

“I would like it better if they made a mascot that looks like Jean Valjean instead of this thing,” said Andrew Kollo, an avid Olympic collector who lives just north of Toronto.

The Phryge is a floppy, cone-shaped cap that dates to ancient times but is largely associated with the French Revolution of the 1700s. After a meeting that clearly took place over many glasses of wine, Paris organizers said, “Hey, why don't we stick some eyes and legs on this ugly hat and make it our mascot?”

Voila, the symbol of the next Summer Games was born.

Les Phryges — there's one each for the Olympics and Paralympics, basically identical except the latter was given a blade in place of one of its legs — were quickly met with worldwide scorn after their unveiling on Monday.

It was a reaction not unlike the one that greeted Whatizit, the original name of Atlanta's tear-shaped abomination that was first unleashed on an unprepared planet at the closing ceremony of the 1992 Barcelona Games.

To that point, Olympics mascots had always been some sort of animal or person or, at the very least, a mythical creature associated with the host country.

Whatizit changed all that — and not in a good way.

He/her/it was so reviled that a hasty makeover was required ahead of the 1996 Games. The name was changed to Izzy, the features were altered a bit (a tongue and nose added, a bottom row of teeth removed), and marketing efforts focused largely on children, clearly in an attempt to make a few bucks before they grew into adults and would know better.

As it turned out, the mascot that left the biggest mark in Atlanta was Blaze, the phoenix-like symbol of the Paralympics. All these years later, motorists can still purchase a personalized car tag with the Blaze logo.

No way. That thing was wiped from everyone's memory as soon as they extinguished the Olympic cauldron. The last thing anyone wanted in Atlanta's notorious traffic was to spot Izzy on the car in front of you.

The Phryge (pronounced something like “freezh”) could be headed for the same fate, at least judging from the initial reaction.

In perhaps the most brutal takedown, the new mascots were compared to ... well, let's just say a part of the female anatomy that was prominently displayed opposite the Eiffel Tower at last year’s International Women’s Day.

Olympic organizers churned out a dizzying display of PR-speak in hopes of transforming these triangular hats into likeable creatures (in case you were wondering, and you probably weren't, they are apparently female).

Here, for example, is the official description of the Olympic Phryges: “Always thoughtful and an astute strategist, she embarks on adventures only after carefully weighing up all of the pros and cons. Just like the Olympic athletes, she knows the importance of measuring all the various parameters to achieve her goals. With her sharp mind, she is modest and prefers to hide her emotions. The Olympic Phryge will lead the movement of all those who take part in sport, and believe us, she will give her all to get France moving!”

Wow, that is one tantalizing piece of headwear!

If enough people swipe right, we could be headed for a stylish leather pump as the mascot of the next Winter Games in Milan.

For now, in our very unscientific survey of Olympic collectors, the closest we came to finding a fan of the Phryges was Frances Carey, a retired schoolteacher and longtime member of the Atlanta chapter of the Olympin Collectors Club.

Carey warmed up after watching a video put out by Paris organizers, showing the Phryges competing in different Olympic and Paralympic events.

“It looks like a bird,” she said. “When you see that, I don’t think it’s going to have any trouble at all” winning people over.

Indeed, many Olympic mascots that were met with ridicule initially bounced back to turn at least some of their detractors into fans.

Yep, even the Mascot Formerly Known As Whatizit.

“Izzy grew on me,” Kollo conceded.

Could he find a place in his mascot-loving heart for the Phryges?

Paul Newberry is the national sports columnist for The Associated Press who has covered 15 Olympics and has a shelf full of mascots. Write to him at pnewberry(at)ap.org.