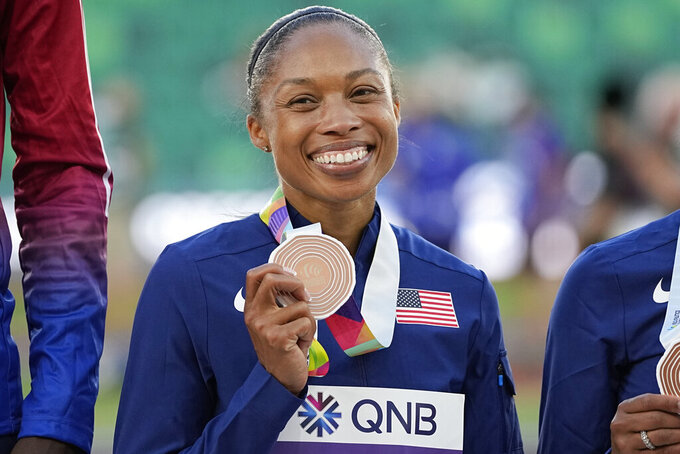 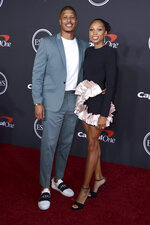 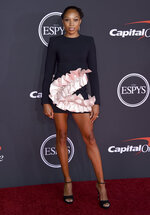 EUGENE, Ore. (AP) — Turns out, Allyson Felix hasn't run her last race. The most decorated sprinter in U.S. history will return to the world championships to race in the preliminaries of the women's 4x400 relay Saturday.

She said team officials coaxed her out of her brief retirement after she helped the mixed relay team win a bronze medal last Friday in what she had said was her last major race.

“The coaches asked if I was available and there was no way I’d turn the team down,” the 36-year-old said through an email with The Associated Press.

The prelims of the 4x400 relay are Saturday and the final will be held Sunday to close out the world championships.

A week ago, Felix ran the second leg on the 4x400 mixed relay squad in what she said would be her last event. Since then, she's had a few speaking engagements and attended The ESPYS in Los Angeles. She's back for another appearance at Hayward Field.

“When I got the call, I locked in and refocused,” Felix said.

The third-place finish in the mixed relay gave Felix her 19th medal at world championships, extending a record she already held. Add in her 11 Olympic medals and it brings the total to an even 30.

At the Tokyo Olympics last year, she was on the gold-medal women’s 4x400 relay as part of a “dream team” with Sydney McLaughlin, Dalilah Muhammad and Athing Mu. The foursome extended the American’s gold-medal winning streak in the event to seven at the Olympics.

Felix leaves quite a big footprint on track. In addition to her bounty of medals, she's also stared down Nike on pregnancy issues during her journey toward becoming an advocate for women’s right. She also started her own footwear company called Saysh.

Now, there's a chance for one more victory lap. She's soaking in the moment with her 3-year-old daughter, Camryn, in attendance.

“My best memories of this week are seeing my daughter cheer for me, seeing young women support me and having them thank me for standing up for them, and walking through the stadium and seeing women wearing Saysh,” Felix said.