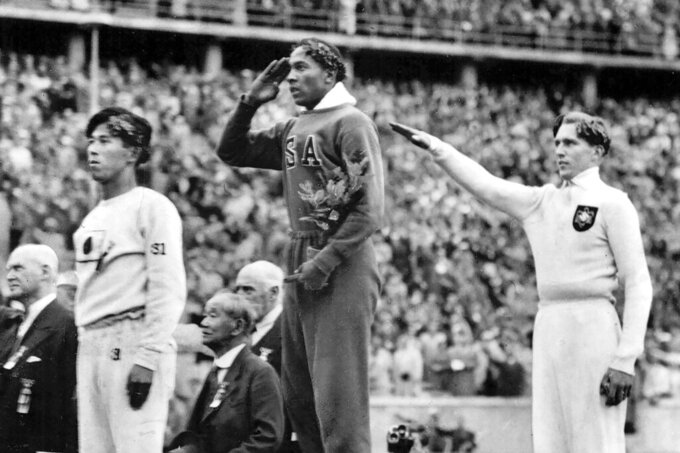 FILE - In this Aug. 11, 1936, file photo, America's Jesse Owens, center, salutes during the presentation of his gold medal for the long jump on, alongside silver medalist Luz Long, right, of Germany, and bronze medalist Naoto Tajima, of Japan, during the 1936 Summer Olympics in Berlin. Long's family has decided to auction his silver medal and other collectibles from his career, which was cut short when he was killed in World War II in 1943. (AP Photo/File)

One of the most consequential Olympic medals ever awarded is on the auction block — the silver medal captured in 1936 by Germany's Luz Long, the long jumper who walked arm in arm through the stadium with Jesse Owens to celebrate their triumphs while Adolf Hitler watched from the stands.

Long's family has decided to auction the medal and other collectibles from the German jumper's career. Long was killed in World War II in 1943.

The auction house selling the medal has labeled Long's collection “The Beacon of Hope.”

“The story of Jesse Owens never seems to end,” said Long's granddaughter, Julia Kellner-Long, in a phone interview from her house in Munich. “My grandfather has always been inspirational and influential in the way I choose to see the world, and this is something I think the world outside needs. Now more than ever. It gives us hope.”

Long cemented himself in Olympic lore during the Berlin Games when he was the first to congratulate Owens on his triumph in the long jump. Later they walked around the stadium together and posed for pictures.

There's also the story Owens told of Long approaching him after he fouled on his first two attempts in the preliminary round. With only one more try to make the final, Owens said Long suggested he take off a foot in front of the board, to assure he wouldn't foul on his last try. Owens took that advice and went on to win the title — one of four he captured in Berlin — with a then-Olympic record jump of 8.06 meters (26 feet, 5 1/2 inches).

Owens was Black, and his stirring success at those Olympics was said to have annoyed Hitler by puncturing the Nazi myth of Aryan racial superiority.

The camaraderie between Owens and Long, and the relationship that ensued between the men and their families, are often held up as the prime example of what the Olympics are supposed to be about — a peaceful coming together of people from different countries and cultures who set their differences aside in the spirit of competition.

“It took a lot of courage for him to befriend me," Owens said, years later. “You can melt down all the medals and cups I have and they wouldn’t be a plating on the 24-karat friendship I felt for Luz Long at that moment. Hitler must have gone crazy watching us embrace.”

The decision to sell came shortly after Luz's son (and Julia's father), Kai, died at age 80. Kellner-Long said the great responsibility of preserving her grandfather's memorabilia should be passed onto an individual, or museum, that has the time and resources to do so. The family also wanted to use the sale to rekindle the story of Long and Owens.

“Even 86 years later, shining a beacon of hope is an important and realistic value, especially in a time of increasing racism, increasing exclusion and hatred,” Kellner-Long said.

The auction house started the bidding for Long's medal at $50,000, and estimated the value at somewhere between $500,000 and $1 million. The bidding runs through Oct. 15. The value of Olympic medals on the open market varies widely. One of Owens’ four gold medals from 1936 fetched $1.46 million. Bill Russell’s gold medal from the 1956 Olympics recently sold for $587,500.

David Kohler of SCP Auctions, which is conducting the sale, said the medal is about Long, but also “the story of the courageousness and the athlete and what he did there.”

Long didn't live long enough to see his legacy play out. He was killed in 1943 in the battle of St. Pietro on the Italian island of Sardinia. Shortly before that, he wrote a letter to Owens, one he predicted would be “the last letter I shall ever write.”

In it, Long asked Owens to go to Germany after the war and find his son.

“Tell him, Jesse, what times were like when we were not separated by war,” Long wrote. “I am saying — tell him how things can be between men on this earth.”

Owens and Kai Long met several times over the years, including at Berlin's Olympic Stadium in 1966. Owens later was a best man at Kai's wedding.