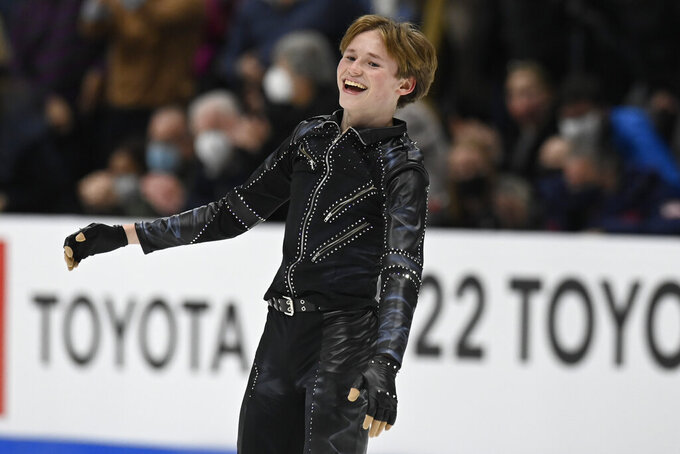 FILE - Ilia Malinin competes in the men's short program during the U.S. Figure Skating Championships Saturday, Jan. 8, 2022, in Nashville, Tenn. All eyes will be on 17-year-old Ilia Malinin when he makes his senior Grand Prix debut at Skate America this weekend. (AP Photo/Mark Zaleski, File)

The new face of American figure skating began to play around with the quadruple axel, that unicorn of a jump that had never been landed in competition, when he started to see some of the sport's best give it a go about a year ago.

Two-time Olympic champ Yuzuru Hanyu? He kept coming up short on the 4 1/2-rotation jump. Nathan Chen, the American gold medalist at the Beijing Games in February? He couldn't pull it off, either.

“At first it was kind of a joke,” Ilia Malinin explained, “but after a little while, I realized it might be possible.”

Possibility became reality at the U.S. Classic last month in Lake Placid, New York. Malinin used the lower-level event as a launching pad to land the most difficult jump in figure skating, and in doing so, stamped himself as not only the new face of American skating but the early favorite to win gold at the 2026 Winter Olympics in Italy.

“For me in general, after landing that jump, it made me feel a lot more confident,” said the 17-year-old Malinin, who will make his senior Grand Prix debut at Skate America near Boston this weekend. “It lets me realize I do have the possibility of pulling it out in competition when there's a lot of stress and a lot of pressure on you.”

What makes the quad axel so difficult is that it's the one jump in figure skating with a forward-facing entry, forcing skaters into an extra half-rotation. The triple axel is vexing enough for most men and women, which is why the jump carries a high point value. But adding another 360 degrees to the jump tests the limits of human performance.

Malinin, who goes by “quadg0d” on social media, started working on it by perfecting his triple axel. Then, he used pull harnesses to help him gain the height required to make the 4 1/2 revolutions. And then he took the jump to the ice, where he crashed enough times that anyone with any sense probably would have given up.

The problem now? Since nobody had ever accomplished it, the base value of the quad axel isn't a whole lot more than other quad jumps, and that makes it a risk-reward proposition where the risk mostly outweighs the reward.

“If they raise the base value, there would be a reason to try to practice it a lot. Right now, we're not so sure what to do with it,” Malinin said. “Right now it's practice so in future years the base value is higher. It'll be a lot more reasonable to put in.”

In other words, there's a chance Malinin doesn't uncork the quad axel at Skate America, or his other scheduled event at Grand Prix Espoo in late November in Finland. The goal at both is to earn enough points to qualify for the Grand Prix Final, which takes place in December in Turin, Italy.

Malinin became the heavy favorite to win Skate America last weekend, when Olympic silver medalist Yuma Kagiyama of Japan withdrew because of an injury. Chen and fellow U.S. Olympian Vincent Zhou are taking the year off, and the strong Russian skaters are still barred from competition due to the country's invasion of Ukraine.

“I think for Skate America, it's really important for me to skate clean,” Malinin said, “and I think to just have a sort of basic layout for my program, and not try to go for anything overexaggerated or two much. To have a layout where I'll be able to perform it really well and really consistently and give me the best shot to go to the Final.”

Japan's Kaori Sakamoto, who broke up Russia's sweep of the Olympic podium with a bronze medal in Beijing, will be the one to beat in the women's competition at Skate America. The top American could be Isabeau Levito, the 15-year-old junior world champion, who will be making her senior Grand Prix debut with an eye on the 2026 Winter Games.

The Americans should have the ice dance favorites at Skate America in world bronze medalists Madison Chock and Evan Bates, who helped the U.S. win team silver at the Beijing Games. The duo replaced the retired Madison Hubbell and Zachary Donohue as the nation's top team, though Kaitlin Hawayek and Jean-Luc Baker are not far behind.

“It's true much has changed in the last eight months since the Olympics,” Bates said, “but nothing really changed for us. We knew we wanted to continue to skate. We love what we do. We know there's a lot of room for growth in our skating.”

Alexa Knierim and Brandon Frazier took advantage of the Russian absence to win their first world title in March, capping a dream season that included spectacular performances at the Beijing Games. Their biggest challenge at Skate America could come from youngsters Anastasiia Smirnova and Danylo Siianytsia, the reigning U.S. junior champions.