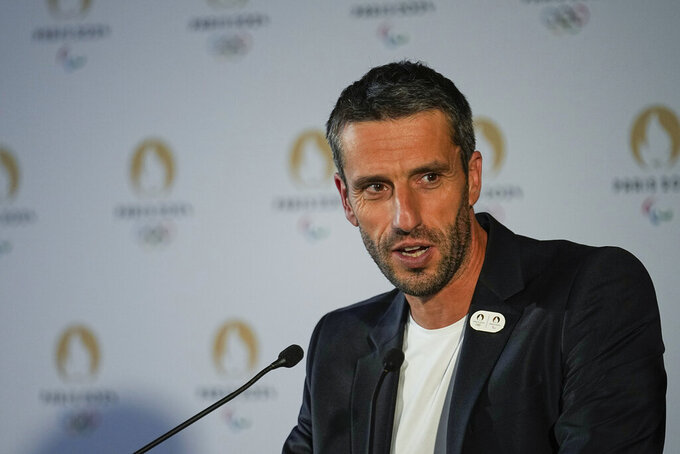 Paris 2024 Games' chief Tony Estanguet speaks during a media conference at the City Hall in Paris, Wednesday, Oct. 5, 2022. The marathon will start from Paris City Hall and wind past famed landmarks, including the Eiffel Tower, before leaving the capital and beginning its upward wind to Versailles, the former town of kings with its spectacular palace, to the southwest. (AP Photo/Michel Euler)

PARIS (AP) — The marathon course at the 2024 Paris Olympics will pay homage to women who protested during the French Revolution by retracing a route they took in 1789. It will also include a strength-draining 438 meters of uphill racing, a punishing endurance test that organizers proudly described Wednesday as “a challenge without precedent.”

And in an Olympic first, female marathoners will get the privilege of competing last, on the final day, Aug. 11. The men will race on Aug. 10.

The runners will race from Paris to the royal town of Versailles — a route that includes some punishing climbs — and back again.

“A challenge without precedent,” said Tony Estanguet, the head of the Paris organizing committee. “We’re aware of the challenge it represents.”

Paris to Versailles is also the route that was taken by thousands of women, and some men, on Oct. 5, 1789, to plead for food at the spectacular palace of King Louis XVI.

Estanguet called the marathon route “a wink at the history of France.”

It will start from Paris City Hall and wind past famed landmarks, including the Louvre and the Eiffel Tower, before leaving the capital and beginning its upward ascent to Versailles, southwest of the capital. The climb has 13% gradients in its steepest parts.

After running past the Versailles Palace, the racers will then double back for the return leg to Paris. They'll have another shorter climb before leg-burning downhill sections, this time with 13% downhill gradients, before racing to the finish in central Paris in front of Napoleon’s golden-domed tomb at the Invalides.

Paula Radcliffe, a former women's marathon world record holder, told The Associated Press that the route's bumpiness could work against runners who usually have the fastest times over 42.195 kilometers (26 miles and 385 yards) and better suit those who can produce a steadier, more sustained effort.

“It's absolutely going to level the playing field,” she said in an interview at Paris City Hall, where the route was unveiled.

The downhills on the way back into Paris could be especially tough for tired legs, she warned.

“There will be a lot of specific training done in preparation to make sure that your legs can not only handle the uphills but the downhills," she said.