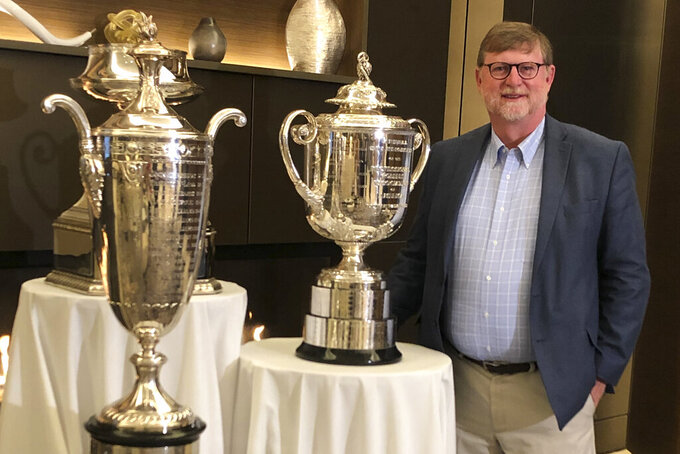 In this photo provided by Grace Vine, Beau Welling stands with PGA of America's championship trophies on Oct. 18, 2019, ahead of a preview event for the new PGA facility in Frisco, Texas. Welling is the golf course architect responsible for PGA Frisco's Fields Ranch West course. Like many late-to-the-game Americans, Beau Welling got hooked on the sport of curling after seeing the shouting and sweeping and clattering stones while watching the Olympics on television. (Beau Welling Design photo via AP)

Like many late-to-the-game Americans, Beau Welling got hooked on curling after seeing the shouting and sweeping and clattering stones while watching the Olympics on television.

A golf course architect who is a senior consultant for Tiger Woods’ design firm, Welling was so taken with the sport at the Turin Games in 2006 that he flew to Bemidji, Minnesota, two weeks later to attend the U.S. championships.

They gave him the best seat at the rink, a spot in the parade and, ultimately, the top job in the sport.

Like a well-placed curling shot that bounces from stone to stone before coming to rest, Welling followed a roundabout path but landed on target: One thing led to another, and in September the self-described “redneck from South Carolina” was elected president of the World Curling Federation.

“In curling, we work a lot on our welcome-ness to everybody. I think that really speaks to that,” said John Shuster, a five-time Olympian who had just won a bronze medal at his first Winter Games when he met Welling at the 2006 national championships. “I think he really saw what curling was. Everybody embraced him — and not as an outsider.

"Someone doesn’t have to be around curling their entire life to be welcomed," said Shuster, who also won a gold medal at Pyeongchang in 2018. “Curling happens to bring out a lot of the best in people because it’s a sport built around sportsmanship, camaraderie and community."

Born centuries ago in Scotland – like Welling’s other passion, golf — curling has flourished in the Nordic countries and Canada, along with patches of the northern United States where Scandinavians tended to settle. The entire U.S. curling team in Turin was from Bemidji, which is how Welling found himself there after the Games.

In an otherwise empty Holiday Inn Express lobby, he spied Pete Fenson, who had just skipped the Americans to the bronze medal – at the time, the only Olympic medal in U.S. curling history.

“I just left Tiger Woods, just left Bill Clinton. Like, those were nobodies,” Welling said in an interview with The Associated Press after he was elected WCF president. “This is a celebrity as far as I’m concerned.”

Welling didn’t know it yet, but he was a bit of a celebrity as well. Word of the sport’s new fan had made its way around Bemidji, and when Welling mentioned he’d flown in from South Carolina, Fenson lit up.

“He’s like, ‘Oh, my God, are you Beau? Beau Welling? ... We thought you changed your mind. We were going to have you be a part of the opening ceremony, but you weren’t here,’” Welling recalled. “And so I’m looking around, like, ‘Am I on a hidden camera television show or something?’ Like, what in the world is going on?”

Event organizers gave Welling prime seating: a stool that was borrowed from the bar and pulled up to the glass, with his name on it. People took him ice fishing. He got on the championship ice to try curling for the first time.

“As a golf person, this was like teaching somebody to putt on the first green Augusta National,” Welling said.

He turned 36 while he was in Bemidji, and the town threw him a birthday party. He was recognized with a standing ovation at the closing ceremonies and dubbed the “official Southern ambassador for the sport of curling.” He marched with the Olympians in their welcome home parade.

“I think they were so shocked that some redneck from South Carolina would show up,” Welling said. “They kind of took me in, and they’re just wonderful, great people. It’s like the sport drew me there, but I end up staying nine days. And the reason I stayed was the people."

But Welling wasn't just another fan like the millions who tune in during the Olympics and then, just as quickly, drift away.

USA Curling decided his knowledge of the sports business through his work in golf would bring value to its board. The national governing body then appointed him as a delegate to the WCF, and in September he defeated three other candidates — all longtime curlers, one of them an Olympic gold medalist — to succeed Scotland's Kate Caithness as president.

“It is an unusual path in that he’s not really come from the club system, nor is he a competitive athlete,” Curling Canada CEO Katherine Henderson said. “I think what it says about curling is that curling has reached a place in its maturity where having really good, innovative sport leaders that have thoughtful, future-thinking ideas are really important to the sport."

AP Sports Writer Jimmy Golen has covered curling at three Olympics. You can follow him on Twitter at https://twitter.com/jgolen.