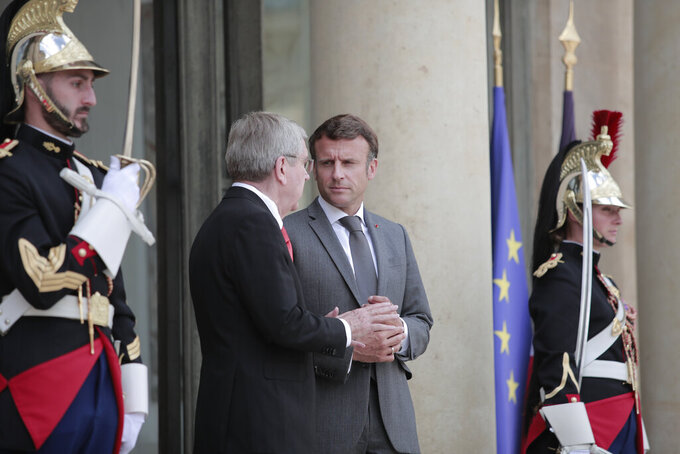 International Olympic Committee's President Thomas Bach, left, talks to French President Emmanuel Macron as he leaves the Elysee Palace in Paris, Monday, July 25, 2022. Tomorrow is marking two years until the Olympics are due to begin in the French capital. (AP Photo/Lewis Joly, Pool)

PARIS (AP) — Organizers of the Paris Olympics marked the two-years-to-go milestone to the 2024 games by unveiling the official slogan — "Games Wide Open" — on Monday and said they got fresh backing from French President Emmanuel Macron for their planned giant opening ceremony along the Seine River.

Amid questions over the costs and security for the opening ceremony, Paris 2024 president ​​Tony Estanguet said Macron, his interior minister and the Paris police chief reaffirmed “their total support for the organization of this ceremony on the Seine."

Breaking with Olympic tradition, the ceremony won't be held inside a stadium and will instead take place on the river that cuts through the French capital.

Boats will transport the 10,500 athletes on the waterway from east to west, past city landmarks, some of which will be used as games venues. Organizers are planning for at least 600,000 spectators, most of them ticketless and watching for free, and are billing it as the largest opening ceremony in Olympic history.

“We won't take risks with the security of the athletes or the security of spectators," Estanguet said. “There is no major obstacle to the organization of this ceremony.”

Organizers also unveiled details on the 10 million tickets. Prices for all sports will start at 24 euros (US$24.5) and nearly half of tickets for sale to the public will cost 50 euros ($51) or less. Some spots for the opening ceremony, those closest to the river, will need tickets but the majority of spectators won't have to pay. All games tickets will be digital only, to combat fraud.

Organizers said their slogan reflected their desire to make the games accessible and use them to also open minds, with emphasis on LGBTQ rights, gender equality and disabled rights.

“'Games wide open' has really been our motivation from the start,” Estanguet said. “It's a simple slogan that says exactly what is important for us.”

Details also were given about the competition schedule. Breakdancing will make its debut as an Olympic sport on Aug. 9, 2024, with women competing first at that event's venue on Place de la Concorde. The men compete the next day.