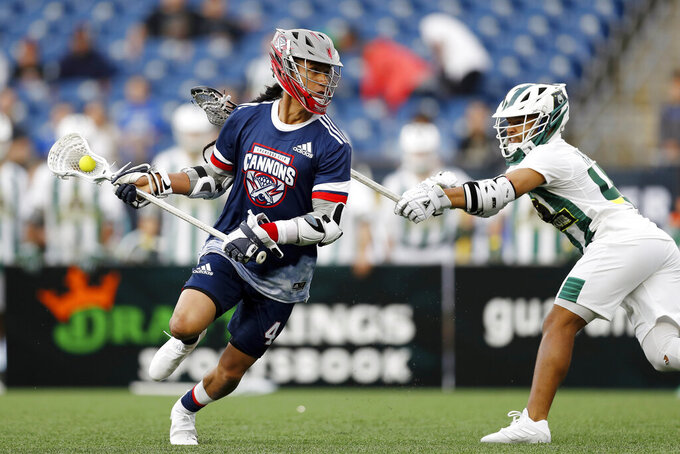 CFILE - Cannons' Lyle Thompson (4) carries the ball past Redwoods' Patrick Harbeson (40) during a Premier Lacrosse League game on Friday, June 4, 2021, in Foxborough, Mass. World Lacrosse, the international governing body of the sport, is making a proposal to have the Native American sport included in the 2028 Los Angeles Olympics. (AP Photo/Steve Luciano, File)

ALBANY, N.Y. (AP) — Paul Rabil had a dream that went beyond the Premier Lacrosse League he founded with brother Mike four years ago. His passion was to bring the Native American sport to new heights with an eye toward getting it back in the Olympics for the first time in more than seven decades.

“It was a part of our early pitch materials — that on the horizon it was possible that lacrosse could be in the Olympic Games," Paul Rabil said. “It’s something that leadership in the sport has been working on for the greater part of the last two decades. There’s just a lot of organization that needs to take place. Most importantly, there is great leadership. We’re in good hands.”

The eight-team PLL began its fourth tour-based season on Saturday before a near-sellout crowd at an 8,500-seat venue in Albany, New York, the first stop on a 47-game slate in 13 cities across the United States. The league has a new four-year contract with ESPN that will enhance lacrosse's global reach to more than 170 countries.

World Lacrosse, the sport's international governing body, also struck an agreement with ESPN that gives the network global media rights to World Lacrosse championships through next year. ESPN will carry 246 games as part of the first multi-year, multi-event media partnership for World Lacrosse, which last July achieved a milestone when the International Olympic Committee granted the federation full recognition.

“I think it’s important for us," said Jim Scherr, chief executive of World Lacrosse. “That exposure for our world championships and international events ... will help us build an audience for the game and build the brand of lacrosse as well as stimulate growth in other countries around the world."

The TV deals mean the games will be broadcast on ESPN platforms to faraway places such as Africa. World Lacrosse had two African members in 2019 and by year’s end is expected to have seven. Nigeria and Rwanda came aboard Wednesday, joining South Africa, Kenya, Ghana and Uganda, and Morocco is expected to join by December. That would increase global membership to 78 countries — a decade ago that total was 43.

It's an important factor for consideration to be added to the 2028 Los Angeles Olympics, as is the sport's surge in the U.S. Over the past two decades lacrosse has been the fastest-growing college sport. There are now just over 900 teams in the three divisions — more than half of them women — and more than 28,000 athletes participating, according to the NCAA.

Just as important, perhaps, has been the growth of the game in Southern California. USA Lacrosse has five Urban Lacrosse Alliance teams to reach youths in the region, and there are more than 15,000 high school players, split just about evenly between boys and girls.

“It really is what we view as kind of a hotbed of lacrosse now, and it will continue to grow and prosper through 2028, whether we’re in the Games or not,” Scherr said, also noting the PLL is headquartered there.

The PLL created a different version of lacrosse in an effort to make the pro game more exciting and more appealing, especially to youngsters, and at each stop on the schedule conducts academies for young players to learn from the game's greatest players. Among the changes were a shorter field to create more scoring chances, and shortened playing time and shot clock duration. That created a blueprint for the federation's Olympic proposal.

The World Games in July, an international multi-sport event featuring 16 teams from nine countries and four continents in Birmingham, Alabama, will feature World Lacrosse Sixes, a version of the game with a smaller field and fewer stoppages in play that would be used in Olympic competition.

Rosters in the Olympics would be limited to 12 players, an important consideration for the IOC's goal of making the Games smaller. Scherr says if the sport is selected there likely would be eight to 12 teams for both men and women.

Developed centuries ago by the Haudenosaunee (Iroquois) Confederacy, lacrosse is the national game of Canada and the oldest team sport in North America, its roots in upstate New York and across the Canadian border. It has twice been a medal sport in the Summer Olympics — in 1904 in St. Louis, where an Iroquois team of Mohawk Indians from Canada took bronze, and four years later in London. It last appeared in the 1948 Games, also in London, as a demonstration sport.

Surfing, skateboarding, and sport climbing, youth-focused sports with deep roots in California that also were in the Tokyo Games, have been added for LA. If lacrosse is selected, the Haudenosaunee Confederacy, which will compete in Alabama and at the Women's World Championship in Maryland in late June, could be allowed to field men's and women's teams. That would pave the way for one of the game's greatest players — PLL star Lyle Thompson of the Onondaga Nation outside Syracuse — to be able to compete .

“The players want the sport in the Olympics,” Mike Rabil said Saturday. “The guys are bought in. We're bought in. It's a big deal for us.”

Brooklyn Nets owner Joe Tsai, an investor when the PLL was formed, said World Lacrosse will talk with the IOC about making an exception for the Haudenosaunee to be included if lacrosse is selected.

“We're all very supportive of this. The Native Americans invented the sport. It's the legacy,” said Tsai, who was born in Taiwan and played college lacrosse at Yale. "They have to be in it, and in fact they're going to help us to get into the LA28 Olympics because if you look at the criteria for selection and the values — they want to have diversity and inclusion, they want to appeal to youth, they want sustainability.

“If you look at being inclusive and having diversity and you're going to exclude a group of people who invented the sport — and they would add much more diversity to the sport — it just flies in the face of the values of the LA Olympics.”