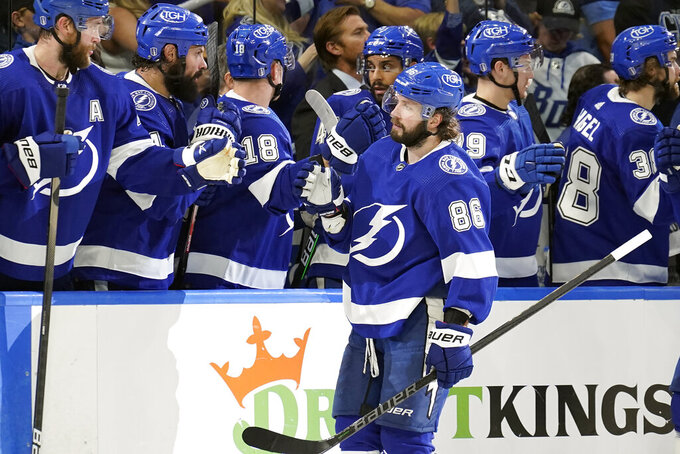 Tampa Bay Lightning right wing Nikita Kucherov (86) celebrates with the bench after scoring against the Toronto Maple Leafs during the third period in Game 6 of an NHL hockey first-round playoff series Thursday, May 12, 2022, in Tampa, Fla. (AP Photo/Chris O'Meara)

A little more than a mile from the United Nations, where Russia’s war in Ukraine is front and center, the crowd at Madison Square Garden chanted goaltender Igor Shesterkin’s name in the final moments of a playoff victory.

Similar scenes played out in the nation’s capital during the first round when Washington Capitals fans serenaded longtime captain Alex Ovechkin with chants of, “Ovi! Ovi!” Ovechkin has long been linked to Russian President Vladimir Putin, who ordered the invasion.

The NHL postseason has inadvertently become an intersection of sports and politics, with Russians starring on North American ice against the backdrop of the largest military conflict in Europe since World War II. While their countrymen in sports from soccer to tennis have been banned from competitions, Russians in the NHL have played on while keeping a low profile away from the rink.

“Everybody’s doing the best they can under incredibly trying circumstances,” Commissioner Gary Bettman told The Associated Press during a recent interview. “Our players play for their NHL teams, no matter where they’re from. At this particular point in time, the Russian players are in an impossible situation.”

A total of 56 Russians skated in the NHL during the regular season, roughly 5% of the total number of players, with 29 taking part in the playoffs, just under 8%. Some are the best the game has to offer, from Shesterkin backstopping the New York Rangers deep into the second round to Tampa Bay’s Nikita Kucherov and Andrei Vasilevskiy pushing the Lightning to their fourth Eastern Conference final in five years in a bid for a third consecutive Stanley Cup championship.

The NHL never seriously considered a ban like Wimbledon made on players from Russia and Belarus, which aided in the invasion. It released a statement condemning the war, ended business operations and partnerships in Russia and stopped posting to Russian language social and digital media sites.

Individual players born there — either when it was the Soviet Union or Russian Federation — have continued to take the ice since Putin’s forces invaded Ukraine on Feb. 24. The NHL said it was concerned about the well-being of players from Russia, adding, “We understand they and their families are being placed in an extremely difficult position.”

“It’s a quagmire and there’s no easy way out of this,” said Stefan Szymanski, professor of sport management at the University of Michigan. “The cleanest answers are to say, ‘We will not ban any athletes,’ or ‘We will just ban all athletes,’ and anything in between is going to be caught up in these gray areas.”

Russian players have been largely quiet about what Putin deemed a “special military operation,” which can carry a prison sentence back home for anyone who calls it a war. Ovechkin, who in 2017 campaigned for Putin, made a plea for peace, Calgary defenseman Nikita Zadorov posted the message “NO WAR” on Instagram and Carolina forward Andrei Svechnikov called it a “hard situation.”

Agent Dan Milstein, a native of Ukraine who represents 14 Russian players under contract in the NHL including Kucherov and Vasilevskiy, told the AP in March that talking about the war in any way was a concern because of family members back home. He and several other NHLPA-certified agents who have Russian clients either declined to comment since or did not respond to messages seeking comment.

High-profile Russian players are largely attempting to stay off the radar off the ice while focusing on their job at the most important time of year. The on-ice success is not debatable, as Russians have accounted for 41 goals — 9% of the total scored in the playoffs — and 21 of 72 wins among goalies through Sunday.

“When you play, you forget everything,” Pittsburgh star Evgeni Malkin said. “It’s the best time to step on the ice and do what you do your whole life.”

Whether they should be on the ice at all while their country wages war inside a neighbor’s borders became a subject of some debate in far corners of the hockey community. Retired Hall of Fame goaltender Dominik Hasek, a Czech, has called for the NHL to suspend the contracts of all Russian players and said the public participation of Russian athletes is “a huge advertisement for the Russian country and its actions.”

Szymanski considers the Olympic truce from Ancient Greece one argument for a blanket ban on Russian athletes.

“Citizens of countries that are involved in war cannot be participating in sport,” he said. "It’s meant to be a celebration of the human spirit, not a means for waging war indirectly.”

That, of course, includes sports as a form of propaganda and nationalistic achievement, with the 1936 Olympics in Nazi Germany a familiar example. Brendan Dwyer, the director of research and distance learning at the Center for Sport Leadership at Virginia Commonwealth, said any ban on Russian hockey players would be a blow to the Kremlin.

“Putin puts these athletes on a pedestal more than soccer, more than tennis,” Dwyer said. “The one thing I continue to say is how important sports are for this regime. It goes back beyond this regime to communism, in general, and the USSR and the way they utilize sport as a way to show power internationally and hockey more so than any other sport.”

Hockey has already been taken away from Russia.

The NHL stopped considering holding any future games there, and the International Ice Hockey federation banned Russian and Belarusian national team players from its competitions. The IIHF also stripped Russia of hosting duties for the 2023 world junior tournament and men’s world championship while Sweden has said anyone who plays in the Russia-based KHL would not be eligible to play for its national team.

Yet the NHL continues to import Russian talent, such as Nashville signing top goaltending prospect Yarsolav Askarov. Or Philadelphia getting goalie Ivan Fedotov under contract several months after he backstopped the “ROC” team to a silver medal at the Beijing Olympics, where Russia was not allowed to participate under its own flag because of doping sanctions across multiple sports.

Bettman said the league is not hiding or downplaying the play of Russians in any way, whether it’s Ovechkin chasing down Wayne Gretzky’s career goals record or the likes of Kucherov and Minnesota’s Kirill Kaprizov lighting it up in the playoffs.

“We’re not running away from that,” Bettman said. “Their performances are celebrated, as is Alex marching towards goal immortality. We celebrate it, and we celebrate every player’s accomplishments because they’re performing in the NHL for their NHL team for NHL fans.”

Szymanski drew parallels to South Africa during apartheid when national teams were banned, while individual athletes in tennis and golf were allowed to continue participating in sports. He and Dwyer agree there are no easy answers on handling this conundrum, especially for a league like the NHL that has thrived because of the infusion of Russian talent in recent decades.

“I don’t know if there’s a better way through it,” Dwyer said. “This is a very, very complicated situation.”