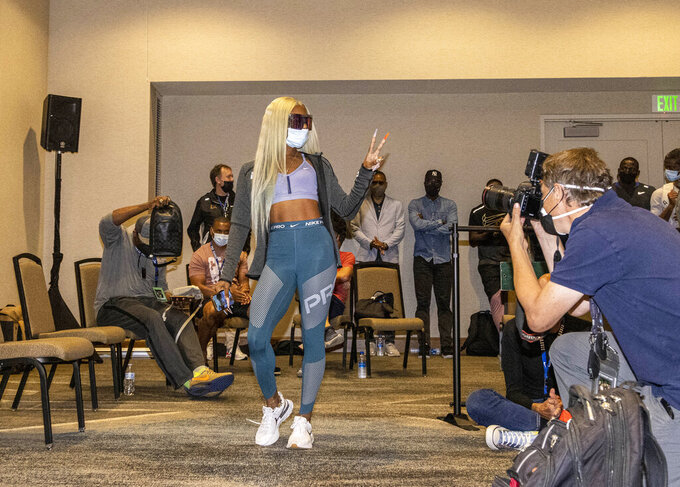 Sha'carri Richardson gestures Friday, Aug. 20, 2021, during a news conference a day before competing in the 100 meters at the Pre Classic track and field meet in Eugene, Ore. (AP Photo/Thomas Boyd)

EUGENE, Ore. (AP) — Sha'Carri Richardson would prefer to let her running do the talking.

The sprinter who couldn't run in the Tokyo Olympics because of a positive marijuana test is set to make her return to the track Saturday at the Prefontaine Classic.

The Diamond League meet is at Hayward Field, the same venue where Richardson won the 100 meters at the U.S. Olympic track and field trials in June and became a national sensation with her long, colorful nails and big personality.

“The attention that I was able to bring to the sport, whether it was negative or positive, for the simple fact people are now watching — as track and field athletes we wish we had more attention on the sport, we wished people paid more attention — I’m honored, I would say," she said, adding: “I really don’t want to do too much talking. I’m ready to race now.”

Richardson's title at the trials was stripped after she tested positive for marijuana shortly after the race. She was handed a 30-day suspension that kept her out of the event in Tokyo and later left off the U.S. team as part of the relay pool, although her suspension would've been completed by the time of the 4x100 race.

The 21-year-old acknowledged the mistake in an interview with the “Today” show after her suspension. She said she used marijuana as a way of coping with her mother’s recent death.

The suspension sparked debate over doping rules for marijuana, a drug that is legal in Oregon.

Richardson is clearly moving on.

“I'm just ready to come back, I'm coming back with the same energy I left the sport with, and I'm eager to bring even more,” she said.

Richardson will run the 100 on Saturday, joining all three medalists from the Tokyo Games: Jamaica's Elaine Thompson-Herah, Shelly-Ann Fraser-Pryce and Shericka Jackson.

The race against the Jamaicans was something fans had hoped to see in Japan.

Richardson is also entered in the 200, tentatively up against 11-time Olympic medalist Allyson Felix. Gabby Thomas, who earned bronze in the 200 in Tokyo, is in the field as well.

The field for the meet, which kicks off Friday night, includes 47 medalists from the Tokyo Games, including Athing Mu, who won the 800 meters and set an American record.

Other standouts include shot putter Ryan Crouser, who set the world record in his event at the trials in June. Emmanuel Korir of Kenya, who won the 800 in Japan, will again face silver medalist Ferguson Rotich as well as American Bryce Hoppel.

The Prefontaine Classic, named after renowned Oregon runner Steve Prefontaine, is the eighth stop on the Diamond League schedule and the only U.S.-based meet. This year's star-studded event will serve as a preview for next year's World Championships scheduled at Hayward Field.

Richardson said she watched the Olympic 100 from home, but didn't elaborate. She's spent the past few weeks training and taking care of herself by spending time with the “genuine” people in her life.

“I would be lying to say I block it out, because you can't really block out the negativity,” she said about the controversy. “If anything, I just pay more attention to the positivity. And the fact that there is so much of it, it just overruled the negative.”