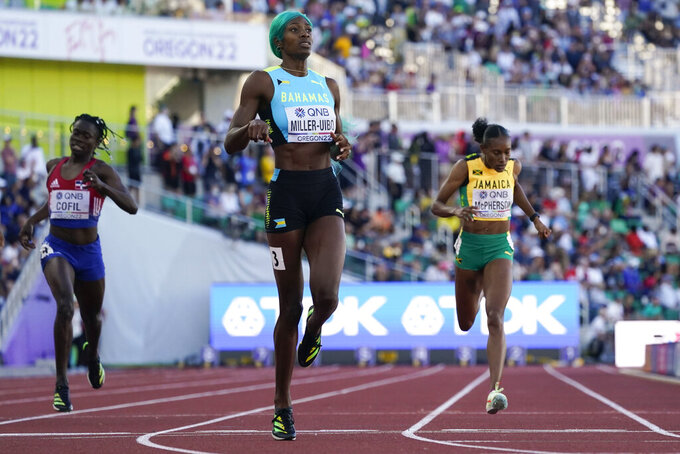 Shaunae Miller-Uibo, of Bahamas, wins the final of the women's 400-meter run at the World Athletics Championships on Friday, July 22, 2022, in Eugene, Ore. (AP Photo/Ashley Landis) 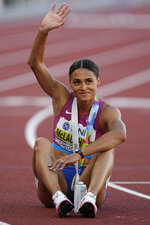 This once-in-a-lifetime athlete is obliterating that mindset as quickly as she's destroying the records she sets again and again.

For the fourth time in 13 months, the 22-year-old McLaughlin set the world record. On Friday, she ran the 400-meter hurdles at world championships in 50.68 seconds. She shattered her old mark by 0.73 seconds, a ridiculous number for a race of this distance and an amount of time that, in the world before McLaughlin, it had taken 33 years to trim.

She beat second-place finisher Femke Bol of the Netherlands by 1.59 seconds. McLaughlin’s main rival, Dalilah Muhammad, finished third in 53.13 seconds, a time that would’ve won the world title with ease a mere seven years ago.

And yet, as McLaughlin summed up her takeaways from the evening — an evening in which she delivered in a race she has turned into one of track's must-see events — she was far from ready to declare she had run the perfect race.

“I haven't had a chance to watch it, so I'll have to do that and go back and talk to my coach,” McLaughlin said. “But I think there’s always things to improve on. I think we’re pushing the boundaries of the sport, especially in our event.”

After McLaughlin received her gold medal and listened to “The Star-Spangled Banner,” World Athletics President Sebastian Coe handed her a $100,000 check — the prize for breaking the record at worlds. This marked the fourth straight major race in which she's bettered the mark.

On a clear, perfect, 72-degree night at Hayward Stadium, McLaughlin left Bol and Muhammad behind by the 150-meter mark. By the time the American reached the final curve, it was clear this would strictly be a race against the clock.

“It was crazy,” Bol said. “She was so far in front at the end, I was almost doubting if I really had a good race. Then, I saw the time and I thought, ‘Wow, that explains a lot.’”

When McLaughlin finished, she bent to the ground, looked at the scoreboard and said, “That’s great, that’s great.” She clutched her knees and smiled. A minute later, the mascot, Legend the Bigfoot, photo bombed her while holding a sign saying: “World records are my favorite food.”

Back then, Muhammad's coach, Boogie Johnson, said there had long been the thought that the Russian's record seemed “a little soft" and ripe for a takeover. Muhammad broke it again, at 52.16, at world championships in 2019.

That was a race McLaughlin lost by a mere 0.07, and one that set her about making changes.

“I definitely thought it was possible,” Muhammad said. “And after that race, I think 49 is possible.”

McLaughlin has set three of her four records on this very track at Hayward Stadium. She has turned what used to be the best one-on-one showdown in track — her vs. Muhammad — into a one-woman show for the time being.

The big question: how?

Some answers lie in the mix of improved track surfaces, new technology in the spikes that hurdling great Edwin Moses compared to “having trampolines on your shoes,” and a new coaching regimen employed by Kersee, who has worked with virtually all of America's greats, in the run-up to last year’s Olympics.

“It's just putting everything that you've done in practice into the race to the point where you're just letting your body do what it does,” McLaughlin said.

Another way to look at McLaughlin’s dominance: Traversing the track while leaping 10 hurdles took her only 1.57 seconds longer than Shaunae Miller-Uibo of the Bahamas needed to win the 400-flat, held about a half-hour before the main event.

In the men’s race, American Michael Norman won the world title in 44.29 seconds, pulling away from 2012 Olympic champion Kirani James over the final 80 meters.

It was the first medal in any major competition for the eight-time national champion, who rigged up a cable-and-pulley system in her backyard to keep up with her training during the pandemic.

And then came McLaughlin. She and Muhammad upped the U.S. medals total to 26 through eight days. The Americans need five more to surpass their championships record. The weekend is heavy with relays, which will include the surprise return of Allyson Felix in the 4x400.

It would be no surprise to see McLaughlin (and Muhammad) on America’s 4x400 relay team, too, just as they were last summer in Tokyo where they helped the U.S. win gold.

Speaking of that 400 flat, McLaughlin teased the idea that she might have a future there, as well.

“My coach thinks there’s a lot more to be done,” she said. "At some point, we could do maybe the 4, or maybe the 100 hurdles. He says to just really enjoy the 400 hurdles while I’m doing it, and then, if you want to expand, go from there. So, the sky’s the limit for sure.”