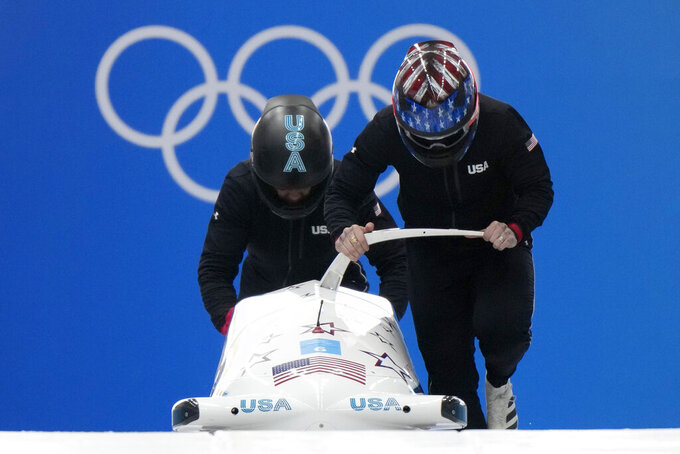 Kaillie Humphries of the United States starts a run during a 2-woman bobsled training at the 2022 Winter Olympics, Wednesday, Feb. 16, 2022, in the Yanqing district of Beijing. (AP Photo/Mark Schiefelbein)

BEIJING (AP) — If Mikaela Shiffrin exits the Beijing Olympics without a medal, it won't be for lack of trying.

Shiffrin plans to enter the team event, which would mean she'd compete in all six Alpine races this year. Of course, starting the events hasn't been the issue. She's failed to finish three of them.

The American star said she felt like a “joke” — a harsh assessment given her accomplishments, but certainly an honest reflection of her frustration over the past couple weeks. Still, she's kept competing in the hopes that the next race could always be the one that turns her Olympics around.

Her final chance is the team event, which USA Network plans to broadcast live Friday night and NBC will air as part of its late-night coverage.

Shiffrin didn't finish higher than ninth in her five individual events. Her best showing was in the super-G. She's won three Olympic medals — golds in the 2018 giant slalom and 2014 slalom, plus a silver in the 2018 combined.

Kaillie Humphries and Elana Meyers Taylor finished 1-2 for the U.S. in the monobob — the first time Americans had done that at the Olympics since 1932.

They'll each have a teammate now in the two-woman event. Humphries will be pushed by Kaysha Love and Meyers Taylor by Sylvia Hoffman.

USA Network will air the first and second runs of the two-woman bobsled during its midday time slot. NBC will have it in prime time.

The first two runs of the four-man bobsled will be part of NBC's late-night coverage.

The fallout from Kamila Valieva's nightmarish free skate will likely reverberate through the figure skating world for a while, but there's one more competition left at the Beijing Games. USA Network will have live coverage of the pairs' short program at 5:30 a.m., and NBC will show it in prime time.

The U.S. men had their Olympic title defense end with a semifinal loss to Britain. They still have a chance to win the bronze medal when they face Canada. USA Network plans to show that during the midday slot.

NBC plans to show the men's freestyle halfpipe final live in prime time. USA Network will have live coverage of it too. American David Wise has a chance to win a third gold medal of his career.

Quentin Fillon Maillet of France (two gold medals and three silvers) and Johannes Thingnes Boe of Norway (three golds and a bronze) have been among the most decorated athletes at these Games. They're set to go head to head in the biathlon mass start, which NBC will show in the afternoon and USA Network will have between 7 and 8:30 p.m.

The women's mass start will be early in the morning on USA Network and in the afternoon on NBC.