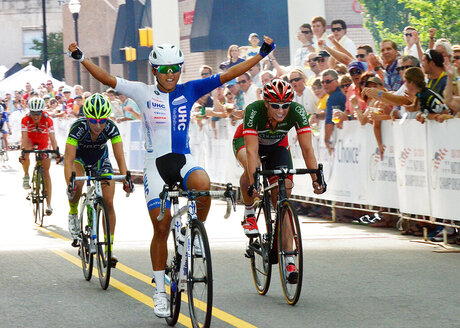 By: DAVE SKRETTA (AP)
KANSAS CITY, Mo.Copyright 2020 The Associated Press. All rights reserved. This material may not be published, broadcast, rewritten or redistributed.
39.0997-94.5786

KANSAS CITY, Mo. (AP) — The sprightly girl aboard the hand-me-down bike had started to cry, tears trickling down her cheeks 50 miles into the longest ride of her life.

Coryn Rivera's father had ridden off ahead of her.

She wasn't happy about getting left behind.

"I still remember that," Wally Rivera said with a laugh, recalling the scene nearly 15 years later. "She was crying and crying because I didn't wait for her."

These days, Coryn is the one everyone is trying to catch.

The dynamic sprinter has become arguably the most decorated cyclist in American history, the winner of an astounding 71 national championships. Her closets back home in Tustin, California, overflow with medals, trophies and other plaudits from triumphs stretching back more than a decade.

She's also only 22 years old. And just getting started.

Rivera's big goal this year is qualifying for the Rio Olympics, then adding to her extraordinary collection of hardware on the rolling hills of coastal Brazil come August.

"The Olympics is really an aura," she told The Associated Press. "To even attend the Olympics is one thing. To be an Olympic champion is one of the pinnacles of women's cycling."

The Olympics have always been an odd-ball event in cycling. Courses tend to favor sprinters or climbers, rarely giving everyone an equal shot, and the one-day nature of the road race means a rider having a particularly good day — or exceptionally bad day — can shake up the podium.

As a result, the Grand Tours — the Giro d'Italia, Tour de France and Vuelta a Espana — along with certain classics and the world championships tend to be more revered among the world's best cyclists.

But there is no Tour de France in women's cycling. Nor are there other major stage races so steeped in tradition. So the Olympics have become the sport's crown jewel.

"As a kid, every Summer and Winter Olympics, it's something I tuned into," Rivera said. "I can feel the passion and pride that people put into their work, and how they represent their country, and it's a feeling I would love to experience. It's historic. It's legendary."

It's something even she thought was a long shot four years ago.

Rivera began riding when her father, a motocross racer-turned-laboratory scientist, put her on a tandem bike when she was 8 or 9. She quickly graduated to her own bike and began tagging along when Wally and his buddies hit the road.

But it turned out she had a fierce competitive streak, and soon Rivera was blitzing her father and everyone else on those informal group rides.

Eventually, Wally took her to the Redlands Bicycle Classic, the longest-running stage race in America. There was a public race and "she just crushed everybody," he recalled.

"Starting off, she had to race with older kids — 16-year-olds sometimes — and she was still just 9 or 10, and she kept winning races," Wally Rivera said.

Her ascent was about as rapid as her finishing sprint.

Rivera quickly won national titles in her age group, then branched out into other disciplines and swept those. There were years she won nationals on the road, in the time trial and on the track, as well as titles in criteriums, mountain biking and cyclocross — a hybrid of off-road and road cycling.

"Right away, she was being successful. She's just one of the talented few," said Mike Tamayo, the U.S.-based team's general manager and sporting director.

"The trick with a rider like Coryn is to make sure you're always feeding the beast," Tamayo said. "She needs success. Success breeds success. She keeps hitting those goals, it only makes her want more."

Missing those goals drives her just as much, though.

At the world championships last fall in Richmond, Virginia, she found herself leading the breakaway with about a mile left, only to get swept up by the rest of the field before the finish.

It was an impressive showing but a disappointing result, and it stuck with Rivera when she took time off over the winter. She finished up her degree at Marian University in Indianapolis, recharged her batteries and began to refocus for her ride to Rio.

It started with a second-place finish in the San Luis Grand Prix in Argentina, then a victory in the opening stage of the Tour Femenino de San Luis. After training camp in Florida, she raced in the Tour of Qatar and is now off to Europe for a campaign that Rivera hopes earns that Olympic bid.

There are four spots on the U.S. team, and Megan Guarnier has already locked up one with her bronze medal at worlds. Two spots will go to time trial specialists, which leaves Rivera only one opportunity.

Winning one of the WorldTour events would virtually assure her of it.

"We built a European campaign with the focus on giving her a chance to win the WorldTour races she can win," Tamayo said. "We built a team around her. We have the variables we controlled the best we can."

But cycling is an unpredictable sport, one slip-up leading to disaster. So while Rivera is focused on qualifying for Rio, she knows there will be plenty of chances to shine on the world stage.

After all, she's 22 years old. And just getting started.