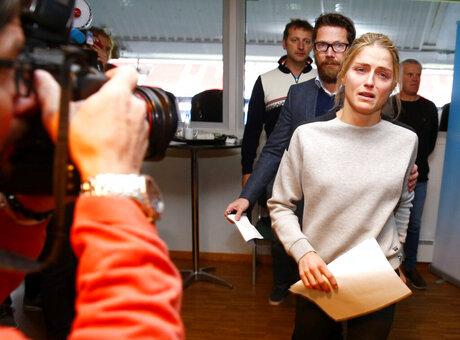 OSLO, NorwayCopyright 2020 The Associated Press. All rights reserved. This material may not be published, broadcast, rewritten or redistributed.
59.912710.7461

OSLO, Norway (AP) — Norway's anti-doping agency called for a 14-month ban on Tuesday for cross-country star Therese Johaug after she tested positive for a steroid she said she took unknowingly.

The agency's prosecution committee filed charges to the Norwegian sports federation's disciplinary committee, which will make a ruling.

Johaug, last year's World Cup champion, tested positive for clostebol, a steroid in a lotion given to her by the team doctor to treat sunburn on her lips during high-altitude training in Italy in August.

The prosecution committee found that Johaug took the steroid unintentionally but investigator Niels Kiaer told The Associated Press that "she could have avoided the case by checking the medicine," which was marked with the word "doping."

Johaug was suspended in October pending the investigation. Kiaer said her two-month suspension would count toward the 14-month ban, so that the earliest she could compete would be in late December next year, less than two months before the 2018 Winter Olympics in Pyeongchang, South Korea.

"I am pleased that the prosecution committee believed in what I've said," Johaug said in a statement to Norwegian news agency NTB. "But I don't understand how what happened can be the basis of a 14-month ban."

Kjaer said the disciplinary committee's decision is expected early next year. That decision can be appealed to a national appeals body or the Court of Arbitration for Sport.

The 28-year-old Johaug won gold in the 4x5 kilometer relay at the 2010 Vancouver Winter Games, with a bronze and silver at the 2014 Sochi Olympics. She's won seven World Championship gold medals and the overall World Cup title twice.