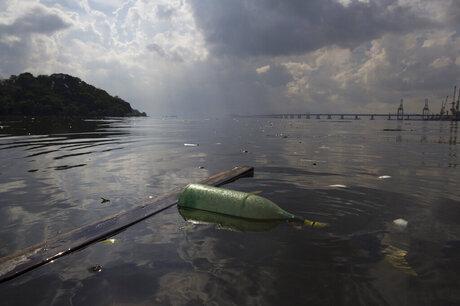 By: JENNY BARCHFIELD (AP)
RIO DE JANEIROCopyright 2020 The Associated Press. All rights reserved. This material may not be published, broadcast, rewritten or redistributed.
-22.9028-43.2075

RIO DE JANEIRO (AP) — Rio de Janeiro's pledge to clean up the blighted waters where the 2016 Olympic sailing events are to be held has suffered another setback: A prominent Brazilian sailing and environmental organization declined a city contract to help clean up sewage- and trash-filled Guanabara Bay.

The Instituto Rumo Nautico said in a statement posted on the website of its co-founder, former Olympic sailor Lars Grael, that the organization's board unanimously rejected the offer at a meeting on Monday.

Under the terms of the project, the state government would have given the NGO $6.3 million to help remove garbage from the competition areas using so-called eco-boats that scoop out floating trash as well as barriers meant to prevent floating trash from reaching the bay. Normally a bidding process is required for such contracts, but this deal would have dispensed of that.

The statement on Grael's site said accepting such a contract presented "institutional risks."

A separate statement from the state environmental authority quotes Environment Secretary Andre Correa as saying he laments the decision.

"The priority now is to create an emergency plan" to clean up the area where the Olympic sailing events will be held ahead of a test event there this August, the statement said.

Much of the sewage in this city of 12 million still goes untreated and garbage pick-up is spotty, so tons of raw sewage and trash flow into Guanabara Bay, as well as Rio's lakes, lagoons and even its celebrated beaches.

A cleanup of the Guanabara Bay was touted as one of the enduring legacies of the 2016 games. But little progress has been made in reversing decades of environmental degradation in the once-pristine waters. With the games just a year-and-a-half away, few observers have hope of improvement. Hundreds of millions of dollars have been spent on successive cleanup projects stretching back decades, with repeated dismal results.

A chorus of prominent sailors has expressed concerns that competitors might fall ill from the spray of the sewage-filled waters and about potentially catastrophic collisions with floating couches or refrigerators.

While top Rio officials have backed away from the initial cleanup pledge, they've insisted that the Olympic event route, at least, will be safe.

In his statement, Correa pledged that the August test event would not be affected by the NGOs' decision.

"No effort will be spared and we'll join forces so that this year's test event takes place within the expected (water quality) levels, as last year's did," Correa is quoted as saying, referring to a 2014 test event that took place without major incident.

Environmentalists have argued that a high tide during last year's event flushed many of the pollutants out of the competition route. They insist of possible dangers if the event takes place at low tide, when islands of sewage sediment and garbage are visible above the bay's surface.

Planned cleanup work on another blighted Olympic waterway also remains stalled. Officials have recently said there's no telling when the dredging of the sewage- and trash-filled Jacarepagua Lagoon System, which hugs the site of the Olympic Park, might finally get started. The project has been approved and its funds earmarked, but it's mired in a legal imbroglio.