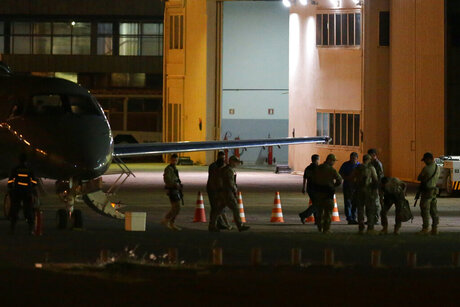 SAO PAULOCopyright 2020 The Associated Press. All rights reserved. This material may not be published, broadcast, rewritten or redistributed.
-23.5475-46.6361

SAO PAULO (AP) — Authorities have arrested another man suspected of belonging to a group that allegedly discussed carrying out attacks during the Olympics, Brazilian police said Saturday.

The Federal Police Department said in a brief statement posted on its website that the man turned himself in Friday night in the central-western state of Mato Grosso. No further details were provided.

Justice Minister Alexandre de Moraes on Thursday announced the arrest of 10 Brazilians who police said had pledged allegiance to the Islamic State and discussed on social media the possibility of staging attacks during next month's Games.

The man arrested Friday is one of two additional suspects that Moraes said were being sought.

Authorities have said that an investigation that began in April showed the suspects were Islamic State sympathizers online but none had traveled to Syria or Iraq, the group's stronghold, or received any training. Several were allegedly trying to secure financing from IS.

Investigators said none of the suspects was of Arab descent. They ranged in age from 20-40, except for one minor.

The top military aide for Brazil's interim government said last week that concerns over terrorism had "reached a higher level" this month after a truck attack that killed scores of people in Nice, France.

Officials did not raise the country's terror alert level Thursday following the raids in Brazil.

Security has emerged as the top concern during the Olympics, including the possibility of violence spilling over from Rio's hundreds of slums. Authorities have said 85,000 police officers and soldiers will be patrolling during the Games.