Home » Brazil » Brazilians in US share mix of pride, skepticism of Rio games 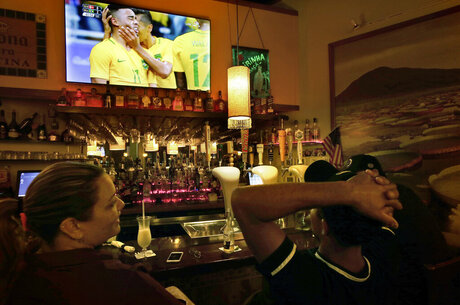 By: BOB SALSBERG (AP)
FRAMINGHAM, Mass.Copyright 2020 The Associated Press. All rights reserved. This material may not be published, broadcast, rewritten or redistributed.
42.2793-71.4162

FRAMINGHAM, Mass. (AP) — Pride in the Rio Olympics is palpable in this Boston suburb, nicknamed "Little Brazil" for its thriving population of Brazilian immigrants and their shops and bakeries flying the nation's green and yellow flag, often alongside the U.S. flag.

But here and in other major Brazilian-American enclaves, many expats also are striking a cautionary tone, reflecting concern that the celebration of the Rio games may only serve to mask Brazil's deeper political, economic and environmental problems.

Estimates of how many people with Brazilian roots live in the U.S. vary widely, as the Census Bureau includes South Americans under the umbrella of those of Latino or Hispanic descent. Framingham, a diverse town of nearly 70,000 total residents, first began attracting large numbers of Brazilian immigrants some three decades ago.

At Rosa's Beauty Salon near the heart of downtown, owner Rosa Barrosa gushes over Brazil's opportunity to host the Olympics.

Barrosa, 54, emigrated 20 years ago but keeps close ties with Brazil and believes skeptics are focusing too much on the negatives, rather than positives about a country which she boasted, "really knows how to throw a party."

Nearby, at the Brazilian-American Center — which helps immigrants assimilate — young children in a summer camp program shouted "yes" in unison when asked if they were proud the Olympics were being held in Brazil. The youngsters displayed a keen knowledge of Olympic happenings, aware for instance that Brazil's vaunted men's soccer team was struggling in early matches, and that its first gold medal had come in women's judo (Rafaela Silva).

Thulio Felisberto, a staffer supervising the children, sensed mixed feelings about the Olympics among many adults in the community.

"Some people see it as 'wow,' a really prideful thing to have it in our country, but other people look at it as maybe like a cover-up for these other political things that have happened, especially recently," said Felisberto, a Worcester State University student who came to the U.S. with his parents at age 5 but still has extended family in Brazil.

While preparing for the games, Brazil has endured a recession, a political crisis that led to impeachment proceedings against the country's president, reports of polluted waterways and a health emergency caused by the Zika virus.

"Right now I think Brazil is not ready for this kind of event," said Gustavo Mota, a manager at Tropical Cafe. Yet while citing similar worries about the nation's economy and politics, Mota also saw potential for the games to present a more upbeat image of Brazil to the world and provide a needed boost to its own self-confidence.

As for the competition itself, he noted that many Brazilians are largely ambivalent toward most sports — with one exception, of course. "People get crazed about soccer but not the other games," Mota said.

Few among the lunchtime diners were paying much heed to rugby or other events being shown on TVs at the restaurant's bar. Larger crowds were anticipated for the soccer matches.

To many young immigrants like Mota, 27, Brazil's future is of far more than passing interest because they haven't ruled out returning someday to live in their native country.

Otavio Souza, 18, a restaurant worker and Framingham High School student, said he came to the U.S. with his mother two years ago to pursue "a better life." His father and brother remain in Brazil. Souza echoes the mix of pride and skepticism about the Olympics.

"Half the Brazilians they like it, and half don't," he said.