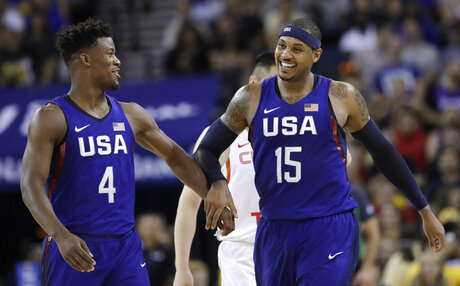 By: JAY COHEN (AP)
CHICAGOCopyright 2020 The Associated Press. All rights reserved. This material may not be published, broadcast, rewritten or redistributed.
41.85-87.65

CHICAGO (AP) — Jimmy Butler spun a basketball on his finger. He joked around with Cleveland Cavaliers guard Kyrie Irving during a brief 1-on-1 exchange. He smiled as some of the NBA's biggest stars lobbed some playful barbs in his direction.

Back in Chicago on the eve of the Olympics, Butler is fitting in quite nicely with the U.S. national team.

"There are a lot of great players on this roster, but more than just basketball players, I get to learn a lot more about them off the court," Butler said, "who they are as people and their families, and how they act, their personalities. I think that's been my favorite part of this whole journey, just getting to know the guys that I go up against every year."

It's good practice for the fall, when Butler returns to a new-look Bulls team that suddenly includes a pair of longtime opponents for the versatile swingman.

Derrick Rose is gone, traded to the New York Knicks. All-Star center Pau Gasol landed in San Antonio. But Dwyane Wade and Rajon Rondo decided to join Butler in Chicago, providing championship experience, but also two more players on the wrong side of 30 who like to have the ball in their hands.

"I'm excited. I know they are as well," Butler said before Thursday's Team USA practice at the United Center. "It's a new start for a lot of us."

Butler's reputation also took a hit in the wake of Chicago's 42-40 finish in April, ending the franchise's string of seven consecutive playoff appearances. The two-time All-Star was openly critical of new coach Fred Hoiberg and did not click with Rose last season.

Asked about speculation he had a hand in Chicago's offseason activity, Butler brushed the notion away like he would an overzealous defender.

"That has nothing to do with me. I don't move guys," he said. "It's like I always say, people are going to think what they want to think."

"That doesn't bother me," he continued. "I know where I stand. I know who I am."

Butler's inclusion on the national team establishes the 6-foot-7 Marquette product as one of the best players in the world, part of a steady rise for the No. 30 selection in the 2011 draft. On the 12-player roster for Team USA, only Draymond Green and DeAndre Jordan are lower draft picks.

Butler, 26, averaged 20.9 points, 5.3 rebounds and 4.8 assists last season. He has increased his averages for scoring and assists in each of the last four years.

"I knew he was a workhorse, but that man really never stops working," Golden State guard Klay Thompson said, "and I give Jimmy a lot of credit because he came into this league and obviously he didn't have the hype he (would) if he was like a top-five pick, but he's worked himself into an All-Star and one of the best wings in the game."

Before this Olympic run, U.S. coach Mike Krzyzewski had only seen Butler on TV.

"The very first thing is just how strong and what a great athlete he is," Krzyzewski said. "Then what a good guy he is, and then what an outstanding competitor. You felt he was going to check every box, but you put two checks in each of these boxes. He's terrific, and he's a really good guy."

Krzyzewski said Butler and Paul George are the most versatile players on the team, capable of guarding any position. Butler had four points and three rebounds while playing 14 1/2 minutes in the United States' 107-57 exhibition victory over China on Tuesday night.

Next up is a matchup with Venezuela on Friday night at Butler's home with the Bulls, and then a trip to Houston for one more game against Nigeria before departing for Brazil. When it comes to the Olympics, Butler said he just wants to win.

It's a very familiar response for U.S. assistant Tom Thibodeau, who coached Butler with the Bulls before he was fired in May 2015.

"To see how much he's grown from his first year in the league to what he's become, it's a testament to how hard he's worked, his intelligence, his drive," Thibodeau said. "Each year he's gotten better, and I think his makeup will allow him to continue to improve each year."