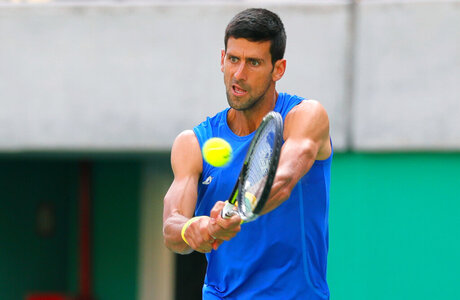 RIO DE JANEIRO (AP) — Novak Djokovic will face 2009 U.S. Open champion Juan Martin del Potro in the first round of the Olympics in a rematch of the 2012 bronze medal match.

Del Potro's ranking has fallen to 145th after he endured three operations on his left wrist. But at his first Grand Slam in 2½ years, he upset fourth-seeded Stan Wawrinka at Wimbledon last month. The Argentine beat Djokovic for bronze in London four years ago.

The top-ranked Djokovic, a 12-time major champion, is seeking his first Olympic title. A potential semifinal opponent in Rio de Janeiro is third-seeded Rafael Nadal, who hasn't played since withdrawing from the French Open because of a left wrist injury.

Reigning gold medalist Andy Murray could face fourth-seeded Kei Nishikori in the semifinals. The Wimbledon champion will meet 35th-ranked Viktor Troicki in the first round in the 64-player draw, which was announced Thursday.

In the women's draw, top-ranked Serena Williams, the reigning gold medalist, could face older sister Venus in the semifinals. Also on her half of the draw is Spain's Garbine Muguruza, who beat the 22-time major champion in this year's French Open final. And a potential quarterfinal opponent is Italy's Roberta Vinci, who stunned Williams in last year's U.S. Open semifinals to end the American's Grand Slam bid.

The Williams sisters, coming off a Wimbledon title, are seeded first in doubles as they seek their fourth gold medal together.

The tournament starts Saturday, though Murray, who will be Britain's flag bearer at Friday's opening ceremony, doesn't play until Sunday. He is also seeded second in doubles with older brother Jamie, who won this year's Australian Open title with regular partner Bruno Soares of Brazil. Andy Murray said he considered his Olympic singles and doubles competitions to be of equal importance.

The Murray brothers face two other Brazilians, Thomaz Bellucci and Andre Sa, in the first round.

"I'm sure the crowd will be pretty lively," Jamie Murray said.

"It's going to be a tough team," he added, "and obviously inspired to play in their home Olympics. Expect them to perform well."

Wawrinka and Roger Federer were expected to contend for another doubles gold medal for Switzerland, but both pulled out of the Olympics because of injuries, leaving the Rio Games without two of the top four men in the rankings. Overall, half of the top 20 won't be in Brazil for various reasons, though the draw still has the star power of Djokovic, Murray and Nadal.

Murray noted that if not for injuries to Federer and Wawrinka, every men's Grand Slam champion of the past decade-plus would be in Rio.

"It is unfortunate. The Olympics in London was very strong," Murray said. "Because of a few injuries and some of the potential health problems, it's made it a little bit weaker this time around.

"Everyone views things differently. For me, the Olympics is the biggest sporting event by far, and I'm proud to be here representing my country."