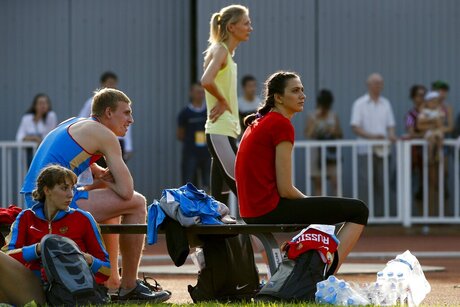 MOSCOW (AP) — Russia is confident that most of its Olympic team will be able to compete in Rio de Janeiro, but its efforts to reinstate banned athletes are a mixed bag.

Sports Minister Vitaly Mutko on Friday told local media that 272 of the country's athletes had been approved by international sports federations, out of an original team of 387, adding that the number could rise.

More than 100 Russian athletes have been excluded by sports federations, including a blanket ban on the track and field team and more than 30 rejected under new International Olympic Committee rules.

After the World Anti-Doping Agency accused the Russian government of directing a vast doping cover-up, the IOC said it would not allow Russians to compete in Rio if they had previously been banned for doping, were implicated in the alleged cover-up or had not been tested often enough internationally.

Most federations have not excluded Russians on the basis of a lack of testing, but rowing and weightlifting are the exceptions.

All of Russia's weightlifters were banned from the Rio Olympics late on Friday for doping for what the international federation called "extremely shocking" results that brought the sport into "disrepute."

The eight competition spots have been offered to other countries.

The International Weightlifting Federation said the "integrity of the weightlifting sport has been seriously damaged on multiple times and levels by the Russians." It called the punishment an "appropriate sanction" to "preserve the status of the sport."

To replace the eight Russian lifters, five countries were offered places in the men's competition — Belarus, Croatia, El Salvador, Mongolia and Serbia. For the women, Albania, Georgia and Moldova became eligible. Because of the lateness of the decision, the IWF said it was not clear whether all the spots would be filled.

World Rowing, meanwhile, has barred 19 Russians, most for insuffient tests. Testing in Russia does not count under IOC rules because of the repeated allegations made against Russia's drug testing agency and national lab, both of which have been suspended.

An appeal is being prepared against World Rowing's decision at the Court of Arbitration for Sport, Russian Rowing Federation head Veniamin But told The Associated Press. That could potentially send the 19 to Rio days before the games start, if the case is heard and approved in time.

"They're now in Portugal," But said. "They're training and they're ready to go."

World Rowing's approval process left just six rowers eligible to compete for Rio, meaning Russia could only compete in one event, the men's four, and meant reserve crews from around the world have rushed to Brazil to compete.

There was good news for Russia on Friday when the Russian Taekwondo Union said it had received notification from the World Taekwondo Federation that all three of its entries could compete in Rio.

However, Russia's best-known track and field athlete, two-time Olympic gold medalist Yelena Isinbayeva, said she had been refused in her last attempt to make the team for Rio following the blanket ban on Russia in that sport.

Isinbayeva had applied again for an individual exemption but was refused by the IAAF, track's world governing body.

"Unfortunately they didn't make an exception for me," she wrote on Instagram. "They didn't admit me for the Olympics in Rio. The miracle didn't happen."