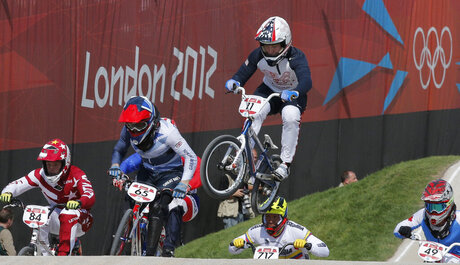 By: GENARO C. ARMAS (AP)
RIO DE JANEIROCopyright 2020 The Associated Press. All rights reserved. This material may not be published, broadcast, rewritten or redistributed.
-22.9028-43.2075

RIO DE JANEIRO (AP) — The pink scar that winds from the bottom of Connor Fields' left hand and past his wrist serves as a reminder of the injury that derailed a promising BMX season.

It didn't stop him from returning to the Summer Olympics, though.

The U.S. BMX team arrived in Rio de Janeiro on Friday with a roster chock full of contenders , with Fields leading the way. While the hand he hurt in the spring isn't fully healed, Fields said it feels well enough to do whatever he needs to do on the bike.

He'll wear a specially designed brace when practice starts on Monday. It allows just enough range of motion to allow the 23-year-old Fields to move the handlebars around a course with lots of twists and bumpy hills.

"They said adversity makes you stronger," Fields said Friday. "Not to get too cheesy, but I think that kind of helped me out in that case."

He is one of four riders from Team USA returning to the Summer Games, along with Nic Long, Alise Post and Brooke Crain. The fifth rider, Corben Sharrah, was an alternate in London in 2012.

Fields was well on his way to easily securing a trip to Rio in April when he hurt the hand while preparing between rounds during a World Cup race. He broke his hand on his handlebar after a jump, not long after he had risen to second in the rankings.

An accompanying picture on Facebook after the mishap showed his frustration, with Fields' tender left hand resting on his stomach while lying on a hospital bed, his right hand covering his face.

A surgery that was supposed to take about 40 minutes lasted for six hours. The damage was worse than what doctors had feared.

"My road was pretty tough," said Fields, who had to rely on being a coach's selection to make the squad.

Long secured one of three spots on the men's side after his third-place finish at the world championships in late May. Sharrah took another spot by winning the U.S. Olympic trials in June.

It was the best-case scenario for Fields because Long and Sharrah were also expected to make the team as the United States' other highly ranked riders.

Fields was still sweating it out at times. He had different scenarios written out on pieces of paper forecasting the points race, and how everything needed to play out.

By late June, it was official, and Fields had made the team.

"It ended up working in my favor," he said. "Basically the wrist wasn't going to be fully healed until after the games."

But he was medically cleared to return to the bike in June. "I had to trust myself that I wasn't going to hit the ground again," he said.

So far, so good for Fields.

"Team is doing awesome," said Jamie Staff, USA Cycling's BMX director. "Everyone is excited and just wants to get on with the job at hand."