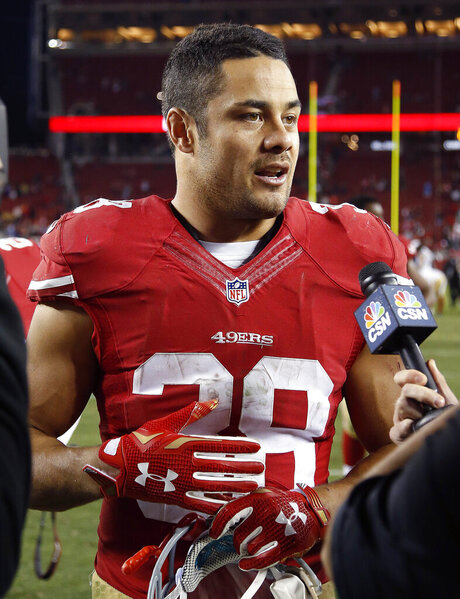 WELLINGTON, New ZealandCopyright 2020 The Associated Press. All rights reserved. This material may not be published, broadcast, rewritten or redistributed.
-41.2866174.776

WELLINGTON, New Zealand (AP) — Former San Francisco 49ers running back Jarryd Hayne was eligible to play for the Fiji sevens rugby team at the Olympics and as early as the world series event in London this weekend, World Rugby said on Monday.

Hayne, who played eight times with one start for the 49ers as a rookie last year, announced on Sunday he was quitting the NFL.

The 28-year-old former rugby league star said he was joining Fiji in the hope of making its squad for the Rio de Janeiro Games. Hayne qualifies for Fiji through his Fijian father, and has played international rugby league for the Pacific nation.

But questions have been raised over his eligibility because he has not recently been part of a registered drug-testing program.

A former head of the Australian Sports Anti-Doping Agency, Richard Ings, expressed doubts on Monday that Hayne would be able to make an immediate transition to rugby because the NFL was not compliant with World Anti-Doping Agency testing requirements.

Ings said World Rugby required a player to be in a registered drug-testing pool for six months before becoming eligible to play in its sanctioned tournaments.

"If Jarryd Hayne had been playing in a WADA-compliant sport, he would have grounds to reduce the six months," Ings said. "But NFL is PED (performance-enhancing drugs) badlands. No chance."

Ings said rugby's six-month return to competition rule "is standard across most sports for athletes returning to international competition. And necessary."

"The rule equally applies to reinstatement or to new players. Sensibly it must, or any NFL player could bulk up and play."

But in a statement on Monday, World Rugby said the six-months rule does not apply to a player "if they are being selected for international competition for the first time."

"This position is entirely consistent with World Rugby's approach to other crossover athletes, including other ex-NFL athletes coming into rugby."

The statement, which did not mention the fact Hayne previously played rugby league at international level, appeared to be referring to the New England Patriots player Nate Ebner, who played for the United States in the Singapore Sevens in March. Still contracted to the Patriots, he received their permission to chase his Olympic dream.

"Hayne would be eligible for the London round of the world rugby sevens series subject to all other regulatory and registration matters being met," World Rugby said.

Hayne was due to join Fiji's 14-man sevens squad in London on Monday. Coach Ben Ryan said he would use the days ahead of the London tournament, the last of 10 stops in the series, to pare the squad to 12 men for the London event and the Olympic Games.

Fiji leads the world series, and will likely go to Rio as the gold medal favorite.

Ryan hailed Hayne's decision to switch codes but said he received no guarantees of selection.

"I have no promises he is going to make the 12, but we will see how he goes," Ryan said. "He will then come into the Fijian camp for the Olympic period. It is a huge challenge for Jarryd but if he gets into the squad it is only going to be on form, because he is a blinding rugby player."