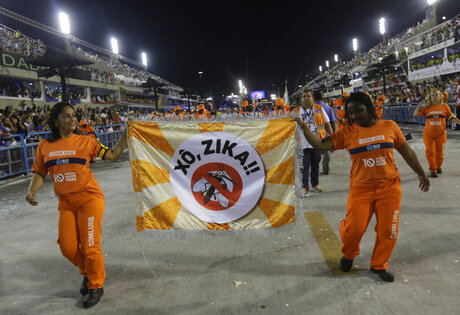 By: DENNIS PASSA (AP)
BRISBANE, AustraliaCopyright 2020 The Associated Press. All rights reserved. This material may not be published, broadcast, rewritten or redistributed.
-27.4679153.028

BRISBANE, Australia (AP) — The Australian team's medical director says water quality will be more of a threat to the health of athletes and officials at the Olympics in Rio de Janeiro than the mosquito-borne Zika virus.

Dr. David Hughes said cases of pregnancy aside, the Zika virus usually results in a mild infection, and 80 percent of those infected often do not get serious symptoms.

Zika, however, is suspected of causing microcephaly, a birth defect marked by an abnormally small head, and pregnant women are urged to avoid travel to affected areas.

In a telephone interview with The Associated Press on Thursday, Hughes said the polluted waters of Guanabara Bay and aquatic venues for other Olympic events in August were another matter when it comes to the threat of illness.

"If someone gets a nasty gastro infection, vomiting and diarrhea, it's not ideal for competing in an Olympic environment," Hughes said.

Testing of Guanabara Bay conducted by the AP over the last year shows disease-causing viruses linked to human sewage at levels well above what would be considered alarming in the U.S. or Europe. The tests include the venue for sailing, but also Rio's Olympic venues for rowing, canoeing, open-water swimming and triathlon.

"Rio poses a multitude of medical challenges when it comes to keeping our athletes and officials safe," Hughes said. "We have had many teams go to Rio, we are aware of the water quality issues. We have protocols in place to minimize the risk, but you can't make the risk zero."

Hughes said he had been contacted by several Australia athletes and officials in the past several days over the Zika virus, but none had indicated they would not travel to Brazil in August.

"A few people have asked advice, and they're generally happy just to receive up-to-date information," he said. "They're grateful that this all came up six months out and not two months out (from the Games). It gives them adequate time to think about it make an informed decision."

Australia's 450 athletes and about 300 officials will be issued mosquito repellent - the best known defense against Zika virus-carrying mosquitoes. They will also be urged to keep their arms and legs covered where possible and not leave windows open in their sleeping accommodation.

Australian athletes and officials will be vaccinated against Yellow Fever, which, along with Dengue fever, is also prevalent in Brazil.

Hughes said he was receiving frequent updates from the Atlanta-based United States Centers for Disease Control and Prevention, the World Health Organization and British health officials on the state of the Zika virus.

"So at this stage .... I feel we are getting enough current information," Hughes said. "It's really important to realize that pregnancy aside, Zika poses less risk to a person's health than mosquito-borne illnesses like Dengue fever or gastro from contaminated water."