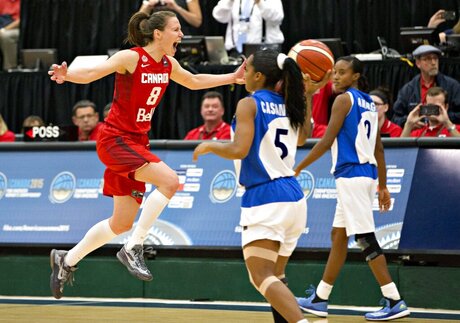 By: DOUG FEINBERG (AP)
RIO DE JANEIROCopyright 2020 The Associated Press. All rights reserved. This material may not be published, broadcast, rewritten or redistributed.
-22.9028-43.2075

RIO DE JANEIRO (AP) — Kim Gaucher has seen the growth of women's basketball in Canada over her 16 years with the program.

She started with the junior national team as a 16-year old and there wasn't much interest in the sport in Canada.

"Hockey and soccer were the top and only sports it seemed that people would talk about," Gaucher said laughing. "When I first started playing, we would have to fly to South America and meet with our teammates there and try and qualify for events. That was our training time."

Now 16 years later, women's basketball in Canada is on the rise — led by Gaucher and a talented young group of players. That growth started when the team qualified for the London Games five years ago on Canada Day.

They earned the final spot into the Olympics and put on a great showing before losing to the U.S. in the quarterfinals. It was the country's first Olympic berth in 12 years and best showing since they finished fourth in 1984. The performance helped inspire some of the team's young players.

"I was a young kid watching our vets play in London and to be playing with them now is kind of crazy," said guard Kia Nurse, who is a junior at UConn and a big part of the future of Canada's team. "To hear the stories of where they were to where we are now is incredible."

Those Olympics were a springboard for the success the team has had the last four years. The Canadians finished fifth in the world championship in 2014 and then — for the first time in 20 years — hosted the FIBA America qualifiers which they won.

That came a few weeks after the team won the Pan-Am Games in Toronto, knocking off the Americans in the gold medal contest. That US team wasn't the Americans national team, but it was lead Breanna Stewart.

"It's truly incredible," said Nurse, who had 33 points in the gold medal game victory over the U.S. "Honestly it's so crazy for us. No one really knew about women's basketball in Canada until the Pan-Am games. Now it's like everyone talks about us."

Canada basketball President and CEO Michele O'Keefe said hosting was a key part of the strategy to help build the program.

"Having the Pan-Am Games and three weeks later the FIBA America championships was huge for us," she said. "It bodes well. Not only do we get a home-court advantage, but the young kids get to see the athletes and the coaches get to see the strategy and level of competition. It gives everyone the chance to see what international basketball looks like."

O'Keefe said a big part of Canada's long term strategy over the past decade has been to invest in and streamline all the country's different age groups, which has built a solid foundation for now and the future.

"The investment has been substantial," she said. "Create an alignment right down our age group teams to our provincial teams. Make it a true feeder system. It's been a huge difference. We've been able to call a kid up from a junior team and they know how to play at this level."

The dividends have already paid off as a record four Canadians were taken in the WNBA draft this past April, including Olympian Nirra Fields.

Now the next step would be winning a medal. If that were to happen the country would be truly abuzz. In the past 80 years, Canada only has two medals in team sports. The men's basketball team won a silver in 1936 and the women's soccer team took the bronze in London.

Canada enters Rio fresh off a victory over 2012 silver medalist France in a pre-Olympic tournament last week. Canada also played against Australia and the U.S. in that exhibition series, giving the team a look at three of the top teams in the world.

"I don't think any of us would be shy to tell you that we set goals as a team and we want to try and come home with some hardware," Nurse said. "For us we're going to come out and peak at the right time."