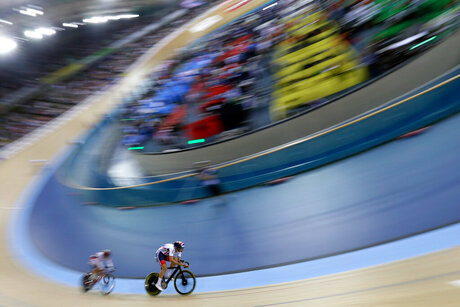 By: LIZ BYRNES (AP)
LONDONCopyright 2020 The Associated Press. All rights reserved. This material may not be published, broadcast, rewritten or redistributed.
51.5085-0.12574

LONDON (AP) — With five months to go before the start of the Olympics in Rio de Janeiro, the president of cycling's world governing body said Saturday that getting the velodrome ready in time for the test event at the end of April will be "a challenge."

A new construction company has been appointed to finish the velodrome with organizers confident the test event - which had already been pushed back - will take place between April 29 and May 1.

UCI president Brian Cookson is confident the track will be ready for the Olympics but he expressed his concern about the test event with less than eight weeks to go.

"We are assured by the Rio organizing committee that the dates 29th April to 1st of May will still be deliverable but I think that's a challenge," Cookson told reporters at the track cycling world championships in London. "I understand that the contractors are on site now with timber and everything is ready to roll. They might have started in the last 24 hours."

With the building almost completed, focus is on installation of the track.

"You have to be assured when you're putting in Siberian timber that the conditions in there are absolutely perfect," Cookson said. "The air conditioning needs to be in place and operational, the moisture control, the dampness needs to be under control because the last thing we want when the track is built is the timber going in and warping and bending."

He added: "I have no doubt there will be a velodrome ready and functional to the required standards for the Olympic Games. The contingency plan is to have the Olympic Games in Rio and to have a track ready and finished. There is no alternative. That's the straight answer."

Cookson was also asked about the sport's approach to mechanical fraud after a motor was found concealed in a bike frame during the cyclo-cross world championships in January.

Cookson said he expects the disciplinary commission to hear the case within the next month with the UCI asking for stiff penalties.

"The regulation is deliberately quite loosely drawn so the minimum of a six-month suspension would not be appropriate for a motor in a bike. Someone using a motor in a bike - that's a very, very serious level of technological fraud and will attract an appropriate penalty."

To combat technological doping, the UCI has developed a system which allows them to scan bike frames before and possibly even during races.

Two hundred bikes, including those of all medalists, will have been tested at the current track championships.

While cycling has been in the spotlight in the recent past for doping, attention is now on track and field with Russia banned from international competition.

"We are getting co-operation from Russia, the cycling anti-doping foundation is," Cookson said.

"I know the Russian federation and the Russian anti-doping agency has itself taken action recently against some cyclists in Russia so I am confident they again will live up to their commitments to us and to the World Anti-Doping Agency. If they don't they will fall foul of the regulations just like anybody else whether its British, French, German American, Russian, Australian, anybody."

Cookson also announced the 2017 track cycling world championships will be held in Hong Kong from April 12-16.