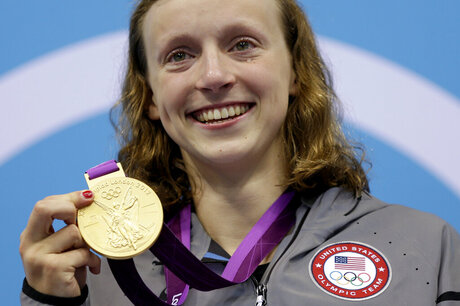 By: RACHEL COHEN (AP)
NEW YORKCopyright 2020 The Associated Press. All rights reserved. This material may not be published, broadcast, rewritten or redistributed.
40.7143-74.006

In a divided America, the political conventions are sure to arouse those sensations among the millions of viewers tuned in. Then in a commercial break, an electric guitar will blare the final lines of the "The Star-Spangled Banner" over images of a diverse group of U.S. athletes tearing up as they heard their national anthem during 2012 Olympic medal ceremonies.

The words flash by on the screen, white on a black background, between the shots of sobbing and beaming champions: "FOR 17 DAYS ... WE ARE ALL ... UNITED." The 30-second spot closes with a rising American flag, the graphic for NBC's Rio Games coverage and the date of the opening ceremony.

NBC is buying ad time on other networks during both conventions the next two weeks, seeking a receptive audience for a not-so-subtle message.

"The country is more partisan, seemingly, than it's ever been," said John Miller, the chief marketing officer for NBC Olympics. "And for 17 days, we say we're all united. For 17 days, we all root for Team USA. We've got to put everything aside for a minute."

The ad debuted March 15, the day of crucial primaries in Ohio and Florida, and aired on CNN and Fox News along with NBC networks. It appeared frequently during NBC's coverage of the Olympic trials, but it will again accompany non-sports fare at the conventions.

"Any place they're talking about politics, that's the spot we're going to run," Miller told The Associated Press last week.

With so much bleak news over the past few weeks — terrorist attacks, shootings and political division — another NBC ad promotes the message of global unity, with athletes narrating scenes of competitors from different countries embracing.

"I don't know of anything else in the world," the voiceover goes, "that brings people together and empowers people so purely as the Olympics does."

The motivation for NBC in these spots isn't just to lure in viewers hoping for a break from the news of the day. It's also to seek to frame the Olympics as a "pure," inspiring event amid the troubles swirling around the Rio Games — from the Zika virus to Brazilian political turmoil, from polluted waters to doping scandals.

Miller, once the executive behind NBC's classic "must-see TV" campaign, was looking to counteract those sorts of concerns before the 2008 Games when he first produced an ad with these themes. Beijing brought its own set of worries, from human rights issues to air pollution.

This is the part of the story where Miller mentions Yoko Ono. He went to John Lennon's widow to buy the rights to "Imagine" for a 60-second spot with a message of global unity.

NBC tested the commercial with potential viewers, and Miller expected it to do well with an older audience. The way the network sells advertising for the Olympics, what matters is the number of households tuned in more than the demographics. So Miller wouldn't have been too alarmed if the spot captivated older viewers but flopped with younger ones.

"I specifically made it a little schmaltzy to capture that older audience," he recalled.

To his shock, the ad, while popular with all ages, tested best with the 18-to-34-year-old range. As he summed up the explanation those younger viewers would relate: "The country had been at war at least half of their memorable lives."

So the theme became a valuable one for NBC to promote both Summer and Winter Games, a way to connect with younger viewers who will one day make up the main audience under the network's lengthy contract to broadcast the Olympics. Miller acknowledged NBC is probably pushing that refrain even harder this time around.

"It seems to be more appropriate now than ever," he said.

NBC dives deep into its research of Olympic viewership, though it's never looked specifically into whether depressing news in the real world makes viewers more likely to tune in. As it happens, the Beijing Games marked the start of an upswing for Olympic ratings in the United States.

Jim Bell, the executive producer for NBC Olympics, doesn't have any numbers to prove why exactly viewers tune in, but he does know what he keeps hearing from acquaintances who tell him they're looking forward to the Rio Games: "How they need a break — whether it's from their job, or the news cycle, or their kids."