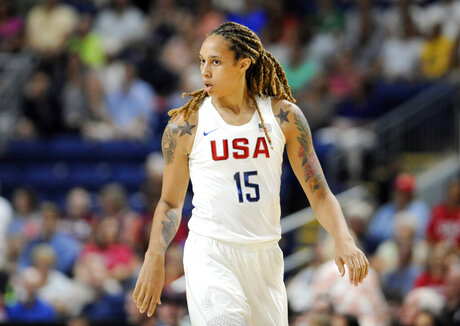 By: DOUG FEINBERG (AP)
RIO DE JANEIROCopyright 2020 The Associated Press. All rights reserved. This material may not be published, broadcast, rewritten or redistributed.
-22.9028-43.2075

RIO DE JANEIRO (AP) — Brittney Griner would love to be the second woman to dunk in the Olympics, though it's not the piece of history she really hopes to get.

That individual goal would be setting the shot block record.

"That's the one I really want," the 6-foot-8 Griner said. "Dunking is nice, but blocking shots helps us defensively and also can lead to offense."

The problem for the Phoenix Mercury center is that no one really knows what that shot block mark might be since there is no official Olympic record book.

"Really? Well then I'll just have to set it," Griner said with a smile. "And blocked shots help us win."

Two marks that are known, are the U.S. records. Candace Parker set the single game record with four in 2012 against Angola. Lisa Leslie holds the mark for an entire Olympics with 14. She also has the overall U.S. record of 36.

"When you got someone that's unique like that and has something not many people have, you have to figure out how to use it to your advantage," U.S. coach Geno Auriemma said of Griner's size and shot blocking ability. "The one thing that big kids fail to do sometimes, is they don't see the value of keeping their hands up all the time. Brittney's 6-8, she puts her hands up she's 7-6. That's a big difference. As the tournament goes on, you'll see her getting better and better."

Griner will get her first chance to go for the single-game mark against Senegal on Sunday when the U.S. women's basketball team begins its Olympic play. The African nation is trying to win its first game at the Olympics. Senegal lost all six of its games in 2000. Nigeria is the only African country to win an Olympic contest, getting a victory in 2004.

The U.S. has played Senegal four times — all at the world championship — and won all four by an average of nearly 49 points. The Americans will face a little stiffer test Monday when they take on Spain.

"We're just excited to finally get to play," Auriemma said. "We have two games in a 24-hour stretch. If you ask the players, they wouldn't mind playing every day."

"Each Olympics is different and we just take it one game at a time," said Tamika Catchings, who has helped the U.S. win golds in the past three Olympics.

Griner missed out on the London Games citing family health issues and academics at the time. Australian Liz Cambage became the first player to dunk in those Olympics in 2012. Griner holds the mark for most dunk in NCAA women's basketball history as well as the WNBA.