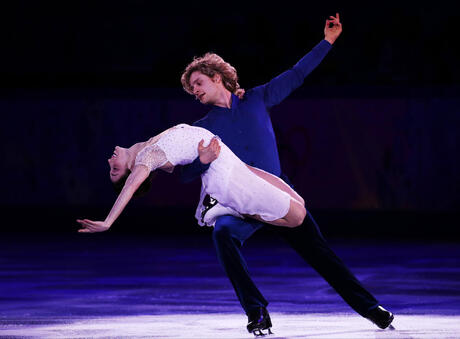 By: BARRY WILNER (AP)
NEW YORKCopyright 2020 The Associated Press. All rights reserved. This material may not be published, broadcast, rewritten or redistributed.
40.7143-74.006

The Sochi champions haven't competed for three seasons, so their announcement Wednesday hardly was a surprise. But their decision, even as archrivals Tessa Virtue and Scott Moir have returned to competition, would seem to place an extra burden on their successors.

Not so, they say, noting that ice dance — once the ugly stepchild of U.S. figure skating but now a source of unmatched strength — has tremendous staying power.

Indeed, Maia and Alex Shibutani, the two-time American champions and current world runners-up, and Madison Chock and Evan Bates, U.S. winners in 2015 and current world bronze medalists, are capable of podium placings every time they compete.

And while they often shift credit to predecessors Elizabeth Punsalan and Jerod Swallow, then Tanith Belbin and Ben Agosto for creating the environment of success enveloping U.S. ice dance, Davis-White are the gold standard.

"I am filled with incredible pride," Davis said. "I feel that American ice dance is such a force to be reckoned with, with two teams on the podium last year at the World Championships. And it really feels as though it has been a team effort back to Liz and Jerod ... and then when Tanith and Ben were able to finally get that Olympic silver medal (in 2006), it felt like a huge step up in terms of what other young American ice dancers saw as possible for themselves.

"I think to continue that progression as such a strong community with such a passion for what it is we do, it fills you with a lot of pride to be part of that group of people."

Measuring up to 2010 Olympic champions Virtue and Moir of Canada is as difficult, though, as measuring up to, well, Davis and White. Coming off a two-year layoff, the Canadians won the Grand Prix final and then beat the top American couples last week at Four Continents.

"I think to be able to rise to the challenge in just practice and competition, with the understanding you are competing against one of the best ice dance teams of all time, I think it is something from which you can really draw a lot of inspiration," White said. "When you are starting to feel tired and feel like maybe you can call it a day, and then you think, 'OK, I am not just trying to beat anybody, I am trying to beat Tessa Virtue and Scott Moir' and what that means. And how you need to conduct yourself in practice and make the most of that time. And so far I feel they are doing a great job, so just continue doing that."

Davis and White will continue skating together, most notably headlining Stars on Ice both this year from April 13-May 21, and for an extended series of shows after the Pyeongchang Olympics. That tour has become something special to them, whether it's offering some expertise and encouragement to 2018 contenders Nathan Chen, Karen Chen and other young Americans, or carrying on the legacy that Scott Hamilton created with the show.

"You can really feel the enthusiasm of the audience and how involved they are," Davis says. "They have a history with skating and they and we appreciate the role Stars on Ice has played in skating history. It's on our shoulders to entertain and get them to come back each year, and that's exciting to us."

Adds White: "It's a lot to live up to, with the expectations created there for so long. It's making sure you find new ways to bring the audience in, and then bring them back."

Both Davis and White are pursuing degrees at Michigan, she in anthropology and he in political science. They laugh when asked if they're on the "Tommy Boy" plan, because each has been attending the school on and off since 2006. Or, as White says, "When Rich Rodriguez was the football coach."

Davis is involved in another project that has her eager to break new ground. She and White were honored by Figure Skating in Harlem last year, and the organization is branching out for the first time — to Detroit. Davis was instrumental in having her hometown selected.

Now in its 20th year, Figure Skating in Harlem combines the power of education with the grace and discipline of figure skating to transform the lives of underserved girls.

"We have a huge base of support," Davis said. "We have top competitive clubs, passionate skaters, enthusiasm about what we can do. FSH started during a renaissance for Harlem and it's going to be exciting to experience that in Detroit."