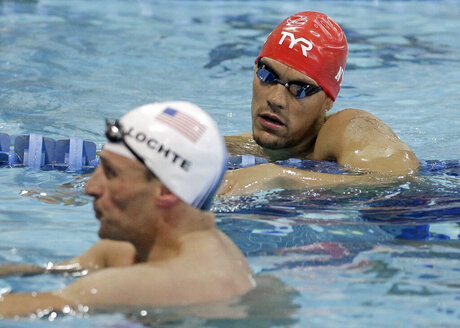 By: PAUL NEWBERRY (AP)
Copyright 2020 The Associated Press. All rights reserved. This material may not be published, broadcast, rewritten or redistributed.

Two-time Olympic medalist Arkady Vyatchanin has given up on his bid to swim at the Rio Games after FINA denied his request to represent Serbia.

The 32-year-old Russian, who won a pair of bronze medals in the backstroke events at the 2008 Beijing Olympics, had a falling out with his country's national federation over training and concerns about potential doping issues.

Now based in the United States, Vyatchanin didn't compete at the last two world championships and hoped that switching his citizenship to Serbia would give him a chance to swim in his third Olympics. But he recently received a letter from FINA saying he didn't comply with rules requiring him to live in his new country for a year, which he maintained was not financially possible because he relies mostly on prize money from the U.S. grand prix circuit.

"Obviously, it was pretty disappointing," Vyatchanin said Wednesday in a telephone interview with The Associated Press. "I thought FINA would have some compassion about my case. I've been out of the biggest international meets for more than 3 1-2 years. I thought this fact, along with fact that I could not afford to live in Serbia, I just felt they would listen to reason about my situation and make some kind of exception for me."

With his hopes of competing in Rio dashed, Vyatchanin said he will focus on becoming a U.S. citizen, a process that should be completed next March. He looks forward to competing for the powerful American team and hasn't given up on making a run at the 2020 Tokyo Olympics, even though he would be 36 years old.

"I'm not that young anymore," he said. "But you know, the bottom line is, it's all in your hands. My mind is kind of preoccupied right now. But I know for a fact that when this drama is over, I will be much more focused on what I have to do in the water at each practice."

Even though he won't be able to compete in Rio, he has no regrets about leaving Russia, especially with his native country embroiled in a widening doping scandal.

"I love my country, my native country. That will stay in my heart forever," Vyatchanin said. "I would like to visit sometime. But the government is the reason why Russia looks bad right now. Unfortunately, that's the way it is."