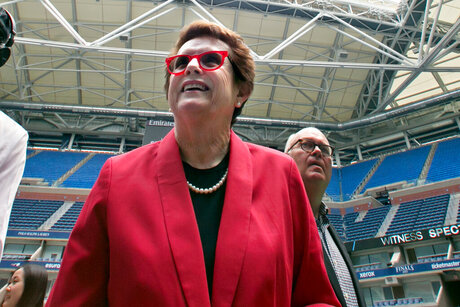 By: KYLE HIGHTOWER (AP)
Copyright 2020 The Associated Press. All rights reserved. This material may not be published, broadcast, rewritten or redistributed.

As athletes around the world head to Rio de Janeiro for the Summer Olympics this week, men continue to overwhelmingly outnumber women in leadership spots at international organizations that govern the games, a new report shows.

Women are projected to make up 45 percent of the athletes competing in Rio. Yet the report released Wednesday by the Institute for Diversity and Ethics in Sport shows that of 8,500 leadership positions at international sports federations affiliated with the International Olympic Committee, only 5.7 percent (two out of 35) of federation presidents, 12.2 percent (17 of 139) of vice presidents and 13.1 percent (51 of 388) of executive committee members are women.

Inside the IOC, only 24.4 percent (22 of 90) of members are women. The United States Olympic Committee is doing better than its counterparts in other countries, with women holding 31 percent (nine of 29) of its governance roles. But that is still less that the numbers historically for women executives at the league offices of the NBA, WNBA, MLS and MLB, as well as NCAA headquarters.

Study author Richard Lapchick, who with the institute has examined diversity in college and professional sports for the past 25 years, said that the gender discrepancies noted in this report shows that the IOC's calls for gender equality across sport "have had no teeth."

"I think that people have come to appreciate that gender diversity in the world of sports is a business imperative," he said. "I think it's particularly important when the participation rate for women in sports have been skyrocketing, especially in the Olympics."

The Rio Games will mark the second straight Summer Olympics that the majority of the U.S. team's delegation will be made up of women. Of 554 athletes the U.S. is sending to Rio, 292 are women and 262 are men.

Women's Sports Foundation founder Billie Jean King said in a statement the report "reinforces that our international and national federations need to bring more women in leadership roles and bring about transformational change in the way we manage and lead in sports."

Val Ackerman, the WNBA's first president, who currently serves as the Big East Conference commissioner, previously served for eight years as a U.S. representative to FIBA. She said the report's findings brought out a "sobering truth."

Ackerman added across the various sports, there is no shortage of areas where women's voices and votes would enrich dialogue, improve decision-making and ensure "that sports remain in step with the times."

"This marginalization is short-sighted and at odds with the ideals of inclusiveness the sports world increasingly holds dear," Ackerman said.