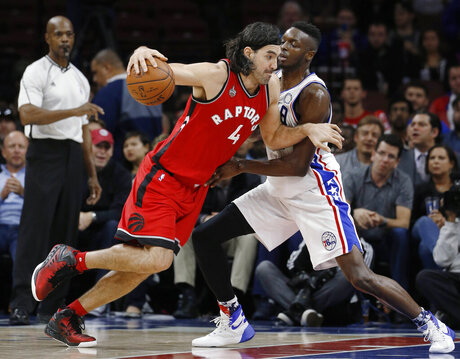 The Golden Generation had grown old, the younger players hadn't grown up enough, and when the Argentines went out weakly two years ago in the Basketball World Cup, Scola considered walking away rather than chase more medals.

But Argentina is back in the Olympics, and this time Scola isn't just leading the basketball team.

The veteran forward will carry the flag in the opening ceremony, capping an amazing turn of events after just two years ago he wasn't sure he wanted to keep playing.

"I try not to do it because it's like, I think, kind of holds me down a little bit, but sometimes I stop for a minute and I look back and it's just, wow," said Scola, whose team will face the U.S. on Friday in the Americans' first exhibition game.

"I had the chance to play four Olympics, to play 10 years in the NBA, to carry the flag for my country, win an Olympic gold medal. I mean, different things that happened along those days that I couldn't even dream of those because it would be too wild to dream. So it's been quite a journey, it's been quite a ride."

It began with the national team in 1998 and would peak with Argentina's rise to the top of world basketball. The Argentines won gold in the 2004 Olympics, bronze in 2008, a silver medal in the 2002 worlds, and were ranked No. 1 in the world.

Manu Ginobili became the beloved face of those teams while going on to win four NBA championships with the San Antonio Spurs. But it's been Scola who kept playing in the later years, carrying the national team through qualifying tournaments when Ginobili couldn't or wouldn't play.

"His career with the national team is just unbelievable," Ginobili said. "He's played every tournament there was to play, and every single one of them at a very high level. So Luis is our guy. He's our main guy, especially since we don't have a lot of size. We need him in the paint. He's been the most reliable guy ever."

That's why it became so hard for Scola when the program appeared to have crumbled.

The 2014 tournament in Spain was supposed to be the farewell for the group known as the Golden Generation. But Ginobili got hurt and left Scola to try to carry an undermanned team largely alone.

He hated that they didn't compete for a title, but even more that he felt the federation wasn't doing enough to further the sport he had done so much to grow in his country. Scola, who wants to play all year every year, even considered ending his own international career.

"2014 was a very rough year and yes, I thought it could be it, because it was a lot of bad things going on," he said. "The federation and the guys running it, it wasn't really working. It was going very, very bad and I just didn't feel like I wanted to play for them anymore, and we were all feeling the same."

But a change atop the federation, now led by president Federico Susbielles, energized Scola, as did the return of Ginobili, who thought he would be retired by now. Fellow longtime mainstays Andres Nocioni and Carlos Delfino are also headed to Rio and will be walking into the opening ceremony behind their teammate.

Scola just signed with the Brooklyn Nets after playing last season on the Toronto Raptors' best team ever. At 36, he is no longer as effective in the NBA as he remains in international play, but remains a popular and respected teammate.

Scola is realistic about Argentina's chances playing in a difficult group that includes Spain, Lithuania and Brazil — the team that ousted Argentina two years ago. The Argentines aren't good enough to duplicate what they did in Athens, but Scola hopes they'll play just as hard.

"Obviously what we achieved in 2004 was the highlight of our careers, something that has never been done for our country. It was a great run," Scola said. "Obviously right now we're in a different stage. It's going to be a little bit more difficult for us right now, but we're going to compete. It's going to be fun."