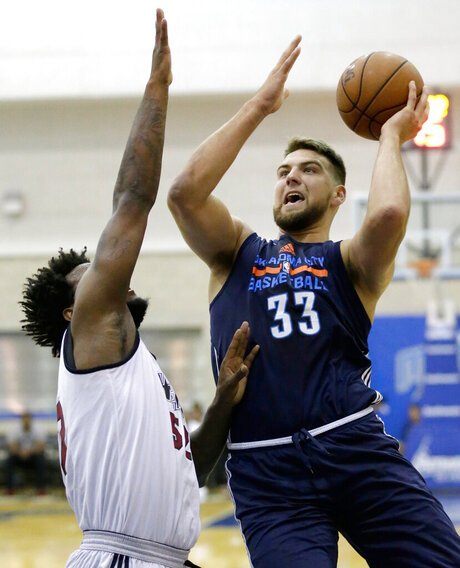 By: CLIFF BRUNT (AP)
OKLAHOMA CITYCopyright 2020 The Associated Press. All rights reserved. This material may not be published, broadcast, rewritten or redistributed.
35.4676-97.5164

OKLAHOMA CITY (AP) — Mitch McGary didn't do himself any favors by getting another drug suspension.

The Thunder forward was hit with a minimum 10-game ban last week on top of the five-game ban he drew this summer.

"For me, I'm disappointed in the fact that he's in that situation," Thunder general manager Sam Presti said Wednesday in his first statements since the suspension was announced. "We're not privy to the NBA's program, so I don't have a whole lot of information. All I can say to you is that I'm disappointed. Then from there, I don't think I have to expand past that."

Presti said McGary will be with the team when training camp begins Saturday, but the Thunder have a surplus of skilled post players. Steven Adams and Enes Kanter, both rapidly emerging young players, likely will log a large share of the minutes, and the team added veteran Ersan Ilyasova and rookie Domantas Sabonis in the offseason. Wily veteran Nick Collison is still hanging around.

That doesn't leave many minutes for a guy who barely played last year and will miss at least 15 games at the start of this season.

"He'll be with us in training camp with an opportunity to compete," Presti said. "All that being said, I think it's going to be a competitive camp. We've got probably more deserving players lined up to come to camp than we have roster spots."

McGary had drug issues in college. He tested positive for marijuana his sophomore year at Michigan and faced a suspension, prompting him to enter the 2014 draft. The Thunder took him in the first round, and Presti said at the time that he was not worried about McGary's past.

After his initial five-game suspension was announced in July, McGary apologized to the organization, teammates and fans in a statement released by the team.

"I clearly made a mistake and for that I apologize to the organization, my teammates, and our fans," he said. "I realize there are only so many opportunities given to you and I need make sure that as a person and as a player, I take accountability and ensure that this does not happen again."

It happened again, and now he has created extra pressure for himself. Sabonis, who played for the Lithuanian national team at the Summer Olympics, is a promising prospect.