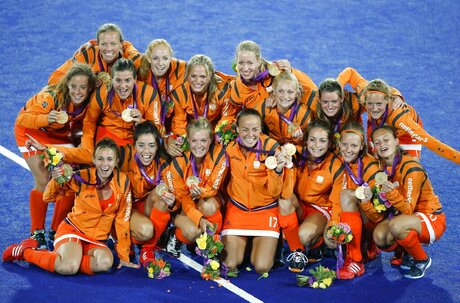 By: CLIFF BRUNT (AP)
Copyright 2020 The Associated Press. All rights reserved. This material may not be published, broadcast, rewritten or redistributed.

A sea of bright Netherlands orange illuminated a most unlikely place.

Back in 2008, the nation with about 16 million people at the time, in an area roughly half the size of Indiana, played for the Olympic gold medal in women's field hockey. Its opponent was the host nation, China, which boasted a population of about 1.3 billion.

One would never have guessed those numbers, judging by the crowd. It was largely filled with orange, the standout color on the Netherlands' uniforms. The Dutch won, and Beijing seemed more like Amsterdam, Rotterdam or The Hague.

"There was orange everywhere," said Max Caldas, an assistant coach for that team who now is the men's head coach. "We are very proud about our colors and very proud to represent the country."

The small nation between Belgium and Germany has put up big field hockey results for nearly a century, and the sport holds a significant place in its culture. The Oranje men have won two Olympic gold medals and three World Cups. They won their first Olympic medal, a silver, in 1928 in Amsterdam. The women's team is ranked No. 1 in the world and is seeking its third consecutive gold medal in Rio de Janeiro. It has won the World Cup a record seven times, with the first title coming in the inaugural event in 1974. No other nation has won more than twice.

Field hockey trails only soccer in interest in the Netherlands. The nation's hockey federation said some 253,000 people play club hockey there — roughly one in 67 residents.

"They see the national teams playing up close, they can mimic and copy, and you see a huge amount of success from that model," said Craig Parnham, the U.S. women's coach who lived in the Netherlands and speaks Dutch. "Success breeds success."

Several factors have helped the nation overcome its small population.

The Netherlands, among the world's wealthiest nations per capita, has committed significant resources to the advancement of the game, starting at the youth level. Australia men's coach Graham Reid remembers playing in the Netherlands, back when there were about 40 artificial surfaces in the country, a huge number at the time. Now, the nation's hockey federation said the country has 880 artificial surfaces — a massive number for such a small nation, and important because of the way the sport beats up grass fields.

"There's a lot of money in the sport over there, which allows them to develop training programs, to develop things that help develop players and the player base, participation numbers," Reid said.

The nation's men's and women's sides are known for successful penalty corners and well-placed passes. For example, in the 2008 Olympics, Maartje Paumen led the women's tournament with 11 goals, all on penalty corners. No other player scored more than five goals in the tournament.

"Dutch hockey are trailblazers in the way they play," said Caldas, who coached the Netherlands women to gold in 2012. "Always had very creative players. We always had a great penalty corners, best in the world for men and the women. That's a part of our DNA."

Four former women's International Hockey Federation (FIH) players of the year — Naomi van As (2009), Paumen (2011, 2012), Ellen Hoog (2014) and Lidewij Welten (2015) — are on the current roster for a nation that has had six different winners. Even with the individual success, the team's rich tradition keeps the stars focused on the big picture.

"Each player has a different ability," Netherlands women's coach Alyson Annan said. "Each player can do something that some girls can't. They learn and identify and share with each other, and when someone is weaker at something than another, they fill the gaps for each other."

On the men's side, Robert van der Horst was the FIH player of the year last year. In the past, Teun de Nooijer won three times and Stephan Veen won twice for the Dutch.

"To have a nation like that produce so many great hockey players is quite phenomenal," Reid said.