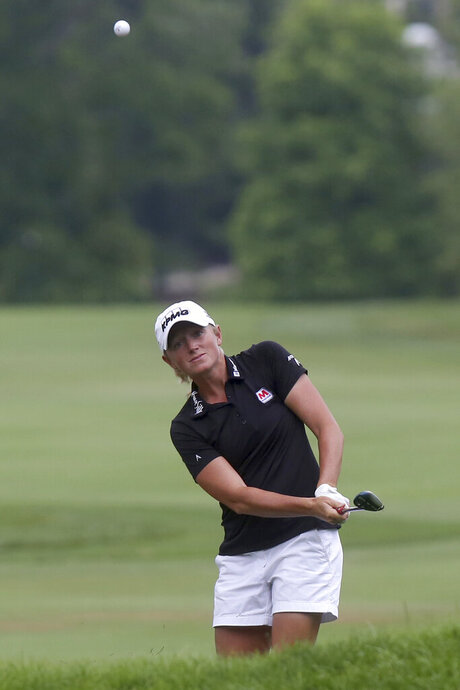 GURNEE, Ill.Copyright 2020 The Associated Press. All rights reserved. This material may not be published, broadcast, rewritten or redistributed.
42.3703-87.902

GURNEE, Ill. (AP) — Women's golf gets off to a running start this week on its return to the Olympics with the UL International Crown, a 32-player, eight-team event that could provide a preview to which nation rules the upcoming Summer Games in Rio de Janeiro.

Spain won the inaugural title two years ago, but won't be back to defend its title when play begins Thursday at The Merit Club some 40 miles northwest of Chicago. Neither will 2014 runner-up Sweden, which also fell out of the top eight in the rankings, determined by their top four players' individual world ranking.

A quick glance at the week ahead:

South Korea claimed the top seed with all four of its players in the top 12. Sei Young Kim is the top-ranked player in the field at No. 5, joined by Amy Yang, In Gee Chun and So Yeon Ryu.

The United States comes in at No. 2, with more LPGA Tour titles (36 to South Korea's 11) and three of its four players — Lexi Thompson, Stacy Lewis and Cristie Kerr — having played in the 2014 event. Gerina Piller, who's still seeking her first LPGA win despite 30 top 10-finishes, will be the only first-timer.

No. 3 Japan has the second-youngest squad and No. 4 Australia the most LPGA titles with 43 — all but two of them belonging to Karrie Webb. The rest of the seeds, in order, are Taiwan, Thailand, England and China.

It's a mix of best-ball and singles matches that will look familiar to Ryder Cup and Solheim Cup fans. But instead of two teams going head-to-head, the International Crown begins with two pools.

South Korea, Australia, Taiwan and China comprise Pool A. The United States, Japan, Thailand and England make up Pool B.

All four team members play two best-ball matches against a different team in their pool the first three days. A win counts for two points; a halved match for one. The two countries atop each pool automatically advances. Third-place countries in each pool meet in a two-player, best-ball playoff immediately after Saturday's matches to advance as the fifth and final country to Sunday's singles.

Each country will play one singles match against every other country with the same point value in place. The team with the most points earned over four days is crowned the winner. In case of a tie, each team making the playoff picks one player for a hole-by-hole, sudden-death singles match.

Most people know golf was included in the Olympics as a team and individual competition in both the 1900 and 1904 games. But women played only in the 1900 event and only as individuals when the gold, silver and bronze medals were swept by U.S. golfers Margaret Abbott, Pauline Whittier and Daria Pratt, respectively.

Women's golf has been hit with far fewer Olympic defections than the men so far, and as many as 16 of the 32 players in the International Crown likely will be at the Olympics. NBC and partner Golf Channel will be devoting significant air time to both the International Crown and the Women's British Open the following week as the network hopes to build momentum for the sport heading to Rio.

The LPGA Tour announced Wednesday that the 2018 event will be played at Jack Nicklaus Golf Club in Incheon, South Korea. The course was the site of the Presidents Cup last year.