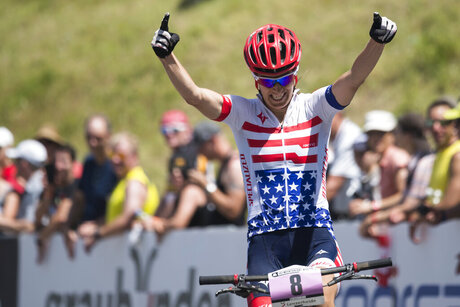 By: GENARO C. ARMAS (AP)
Copyright 2020 The Associated Press. All rights reserved. This material may not be published, broadcast, rewritten or redistributed.

Lea Davison, Team USA's best hope for an Olympic medal in mountain biking, loves to see girls on the trails. So much so that she has made it a bit of a mission in life.

Davison and her sister, Sabra, started the nonprofit Little Bellas program in 2007 as a way to mentor young cyclists. The goal, according to the group's mission statement, is to help young women "realize their potential through cycling" by having fun in a constructive environment.

When Davison wasn't racing overseas this spring and summer, she was home spending time training and with the program .

"It's inspiring the next generation," Davison said, "but we're not necessarily ... competition-focused."

Davison will be all about competition in a matter of days, and there may be no better inspiration for aspiring cyclists than a woman who has bounced back from two hip surgeries to qualify for two Olympic Games.

"I know that this Olympics in Rio is a big goal for her and a big reason she was able to stay motivated through her two injuries," said Marc Gullickson, national mountain bike program director for USA Cycling.

The 33-year-old Davison finished 11th four years ago in London while U.S. cyclist Georgia Gould took bronze. Gould isn't going to Rio this year, with USA Cycling selecting the two highest-ranked riders in Chloe Woodruff, who is 27th, and Davison.

Ranked 15th in the world, Davison won silver in early July at the World Championships in the Czech Republic. Her career-best finish at worlds came a week after she was named to the Olympic team for a second time.

Davison had a quiet spring, though that was in large part by design with the Olympics in mind.

"Lea had such a strong performance over the last two, three years," Gullickson said. "Although not an automatic pick for the team, she was pretty close to that. ... She had the luxury of laying off of that a little bit."

Davison, born in Syracuse, New York, and a resident of Vermont, has a history of coming back strong from layoffs.

She had surgery to repair torn cartilage in her right hip in January 2014, about four years after a similar injury on her left hip that required a similar procedure. These are not typical problems for cyclists, Gullickson said, but are more often found in running or jumping sports.

Just a conversation with Davison offers a glimpse of an optimistic outlook that helped power her through recoveries. The long-term goal of the Olympics was always in focus.

"Came back, and stronger in order to get to the next level," said Davison. "Seems like the next injury is an opportunity for something."

She got on the bike each time, the kind of lesson that Davison might instill to girls aspiring to be future Olympians.

Because of her hip surgeries, Davison has adjusted her training to include more of a focus on prevention and strength training. Cross-country mountain biking can be a bumpy ride.

"You're navigating these extreme obstacles, your heart rate is through roof, you're cross-eyed," she said. "Now in that state, you have to navigate these technical descents for many laps ... and it's scary."

But she ends up getting right back on the bike.