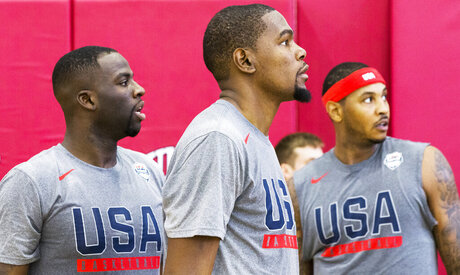 He wants a better U.S.

Anthony wants an end to the gun violence, the killing of blacks and the targeting of police, and right now his quest for that seems bigger than his desire for would what be a record third gold medal.

The New York Knicks forward has spoken out more and more lately, challenging fellow athletes to do the same. He's taken his message to Instagram and the ESPY Awards , and if he wants a real forum, there aren't too many bigger spotlights than the Olympics.

Will he take his message all the way to the medal podium?

"We always say that the timing could not have been any better for us as a country, having a chance to come together and being united," Anthony said, "then go over there on the biggest stage you can possibly play on and have that voice and represent something that is bigger than us as players."

For now, the U.S. doesn't plan to wait for Rio. Details are still being finalized, but Anthony, NBA Commissioner Adam Silver and U.S. coach Mike Krzyzewski have hinted at plans for some kind of community forum in conjunction with the league when the Americans head to Los Angeles following camp to play an exhibition game against China.

"I think it can be great. When we talk about 'united' that's what we keep talking about," U.S. forward Draymond Green said. "Obviously we saw a lot of guys speak out about guys getting in front of this thing, and coming together right now with the opportunity to possibly win a gold medal and try to lead the charge with what's going on in the country. I think it could be really special."

Anthony isn't just a celebrity posting politically correct messages on social media accounts. He marched with protesters in his hometown of Baltimore last year following the death of Freddie Gray in police custody, took part with NBA players in an ad campaign to stop gun violence.

And none of that changed anything.

In recent weeks alone there were black men killed by police in Louisiana and Minnesota, followed by attacks on officers in Dallas and Baton Rouge. Anthony eventually was moved to write his lengthy Instagram post, and later a plea for involvement in a piece for The Guardian , where he talked about the opportunity his teammates have to make a stand during the Olympics.

"I'm kind of a guy who likes speaking behind closed doors. I don't like taking credit," Anthony said. "I really like talking to guys one on one. Any of my colleagues will tell you I've had that voice. They always came to me for that type of advice. But now is an opportunity to get it out there. It's a very sensitive time for us."

He wasn't planning on going to the ESPY Awards until a conversation with close friends and former Olympic teammates LeBron James, Dwyane Wade and Chris Paul, leading to their powerful opening to ESPN's awards show last week.

"What they did at the ESPYs was unbelievable and we applaud these guys," Krzyzewski said.

Those players were set for life financially two contracts ago, let alone what they'll sign for this summer and next. Some members of this Olympic team are still waiting on their big endorsement dollars, and speaking out about a cause can come with a cost.

Even Michael Jordan was famously unwilling to take it as a player, but Anthony — who endorses Jordan's sneaker line — won't hear that excuse anymore.

"At the end of the day, the tragedies that's happening, it affects people," Anthony said. "We're athletes, but at the end of the day we're human beings, so we're affected by all of that. We have families that are in some of those cities."

Anthony said he doesn't have any solutions for the current problems and isn't sure anyone else does. Nor is he sure what the next steps are, but he knows he has helped spark conversation in recent weeks, and his teammates know they need to help continue it.

"That's our job," U.S. guard DeMar DeRozan said. "A lot of people look up to us. We're an inspiration to a lot of people. So for us to share a positive light and try to make things better, as a collective group of guys, that's our duty to do that."

Take an inside look at #USABMNT practice Day 2 as @carmeloanthony was wired for sound! pic.twitter.com/K7Jyy0qWom