Home » United States » While US basketball readies for Rio, Popovich preps for 2020 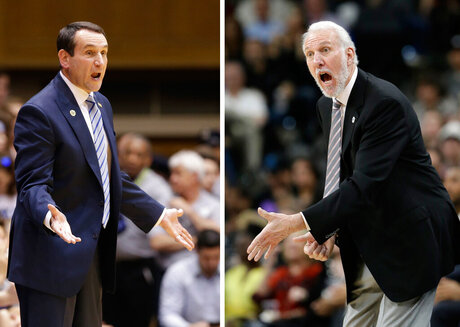 LAS VEGAS (AP) — Mike Krzyzewski is working with his team when suddenly Gregg Popovich enters the gym with his own guys looking to play ball.

Krzyzewski vs. Popovich. Five-time NCAA champion vs. five-time NBA champion. It's a mega matchup that would look good on one of the giant marquees that light up Las Vegas.

Except this is just practice for the 2016 Olympics.

While Krzyzewski readies the Americans for Rio, Popovich is getting an early start on his own Olympic preparations. The San Antonio Spurs coach is overseeing the Select Team of young players training against the U.S. this week, and some of those players might be in the mix when Popovich coaches the Americans in Tokyo.

"He's seen what we're doing and it's called succession," Krzyzewski said. "The fact that we're both military guys, we understand that I have the unit right now, he's going to take command of the unit, and we both want the unit to do well."

During practices this week, Popovich works with the young players in one part of UNLV's basketball complex while Krzyzewski and his staff put the national team through drills in another. Eventually, the Select Team heads into the main gym for scrimmaging.

"Pop is in all the meetings, he's participating and this is giving him a feel for how we do things, and so it's a seamless transition," USA Basketball chairman Jerry Colangelo said.

That's what Colangelo had in mind when he announced Popovich's hiring in October. That allowed Popovich to become a part of the program before he inherits it.

"I get to spend time with Coach K and Mr. Colangelo and pick their brains, see how they operate, see what works," Popovich said. "If I learn from them it makes it a lot easier and smoother for me when I end up doing this, so watching them operate is a huge advantage for me in that sense."

Krzyzewski is ending his run after Rio, one that started when Colangelo chose the Duke coach over Popovich when he started the national team program in 2005. There was some anger after, as Popovich — an Air Force Academy graduate — felt Colangelo mischaracterized his interest in his national team's job when explaining the choice to the media.

They met last summer in Carmel, California, to clear the air about the past and start laying out the future. Colangelo offered Popovich the job, which he soon accepted as long as Colangelo agreed to stay on for four more years.

But before Popovich gets to coach the All-Stars, he's got the future stars.

The Select Team is made up of young NBA players and serves as a way to get into the USA Basketball pipeline. That's how 10 of the 12 members of this Olympic team got their start, with Kevin Durant and Kyrie Irving in particular using their stints as springboards to stardom.

There are 25 players on this year's roster, some a few years into the NBA and others just a few months out of college, such as No. 2 pick Brandon Ingram. Being invited this week means they have talent, and a few days under Popovich can only make them better.

"Honestly, Coach Pop, he's saying a lot of things I've heard from my coaches before, but when you hear it from Coach Pop it sticks in that much more," Phoenix Suns All-Rookie selection Devin Booker said.

But Popovich is doing more than working with the younger guys. He's making his mark on this year's team, which has some players who have never suited up for Krzyzewski, by providing his knowledge about them.

Popovich will lead the Americans in the 2019 Basketball World Cup and then the Tokyo Games. He was an assistant to Larry Brown at the 2004 Olympics, when a hastily assembled U.S. team lost three times in a third-place finish, so he's seen what happened to unprepared teams before Colangelo and Krzyzewski overhauled the program.

Now he's got four years to get ready.

"They've changed this whole thing since 2004, when it was a debacle," Popovich said. "Now it's this, and I'd be ignorant if I didn't try to figure out everything that they've done to make it like this."