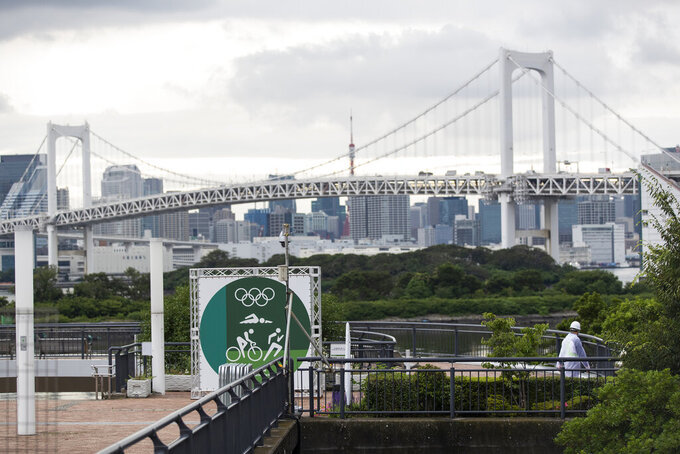 A guard, lower right, walks around a park being prepared for the Olympics and Paralympics Games in Tokyo on Thursday, July 1, 2021. (AP Photo/Hiro Komae)

WELLINGTON, New Zealand (AP) — The Samoan government says three home-based members of the Samoa Olympic weightlifting team will not be allowed to compete in Tokyo due to COVID-19 concerns in Japan.

Minister of Communications Afamasaga Rico Tupa’i said in a statement that the nation's Cabinet had decided to withdraw Samoa-based members of the team because of Japan’s high infection rate.

Cases in Tokyo have been steadily on the rise. Experts warn the highly contagious delta strain could trigger rapid resurgence of the infections that may require another state of emergency even during the games starting on July 23.

The president of the Samoa Olympic Committee, Patrick Fepulea’i, released a statement on Thursday confirming the government announcement but clarifying that eight other overseas-based members of the team will still compete in Japan

“Samoa has 11 athletes who have qualified to compete at the Olympic Games,” Fepulea’i said. “Of these three are based in Samoa (all members of weightlifting team), two are based in Australia (boxing team), four are based in New Zealand (sailing and canoeing team), one in the U.S. (athletics) and one already in Japan (judo).

The news came as members of the Samoan men’s and women’s rugby sevens teams were reported to be stranded in Dubai on their way home from an Olympic qualifying tournament in Monaco after being denied re-entry to Samoa for failing to comply with their government’s COVID-19 protocols.

Neither team has qualified for the Tokyo Games.

The plight of the teams was first highlighted on Twitter by former Samoa international Daniel Leo, who said team management had run out of funds and the players were depending on Dubai-based Samoans for food and accommodation. The UAE Rugby Union and Asia Rugby have since said they are working to assist the teams.

Leo said the teams, which have to transit through New Zealand on their way to Samoa, are likely stranded until the next flight to Auckland on July 27.

“I think approximately 30 people are affected by this in Dubai . . . so now we are faced with a difficult decision,” Tuilaepa said. “And our decision, based on safety, (is that) we will still wait until they are fully vaccinated because this is a failure on the manager’s side. He should have looked into this."

The Samoa Observer newspaper quoted an official of the Manu Sina women’s team, who asked not to be named, as saying the teams were hopeful of flying to Auckland on July 27.

Team members contacted by the newspaper said they had been kept in the dark about the reasons for their stranding. They initially heard they had been unable to secure places in managed isolation in Auckland where the team would have completed 14 days of quarantine before returning to Samoa.

The Associated Press attempted to contact Manu Samoa officials by phone and email but messages have not immediately been returned.