American biathletes still on the hunt for Olympic medal 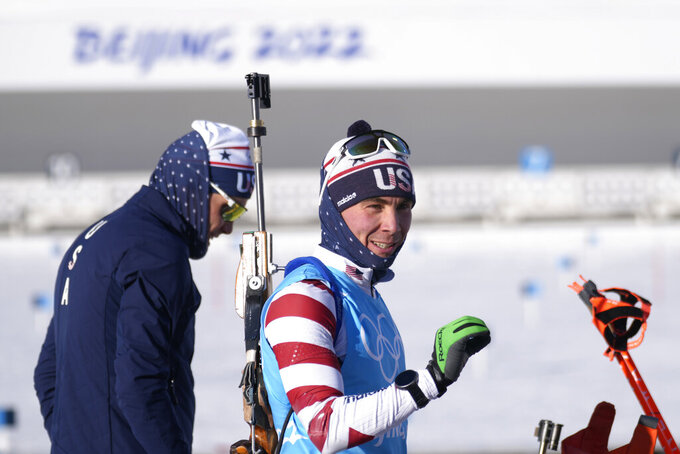 Members of the United States team are seen during practice at the 2022 Winter Olympics, Sunday, Feb. 6, 2022, in Zhangjiakou, China. (AP Photo/Kirsty Wigglesworth)

ZHANGJIAKOU, China (AP) — The United States has won medals in every sport at the Winter Olympics except one: biathlon.

American biathlete Leif Nordgren, who has competed in the last two Winter Games, said because of that he regularly hears the question — Will this be the year?

“One of the first things that always pops into my head is just the sheer size of the field that we’re competing against,” said Nordgren, who is from Hinesburg, Vermont. “I think our field might be the biggest of all the winter sports.”

Up against 100 of the best biathletes in the world, each one capable of winning a medal, things can be challenging at the biggest event on the calendar.

Hopes were high at the 2018 Pyeongchang Olympics, especially after Americans took home a gold and a silver at the biathlon world championships the year before.

And just before the 2018 Winter Games started, Dunklee and Bailey won bronze in the single-mixed relay at the 2018 Open European Championships in Italy.

But the Olympic team came home empty handed, at least when it came to medals.

“We’re going after trying to be the best in the world. And that is not an easy thing to do,” Dunklee said.

But medals aren't everything.

“If you get fixated on whether or not you can do that, you’re missing the whole point of the joy of competing,” Dunklee said. “It’s really important to just challenge yourself and push yourself and see what you’re capable of."

The team appears capable of a lot. They recently enjoyed some of their best World Cup results ever.

Egan said those experiences have given the team confidence.

“It’s a great feeling to come into the Olympics with some good results under your belt, especially fresh ones, like what we all were able to achieve together at our most recent World Cup," she said.

The team was off to a good start at the Beijing Olympics.

At one point during the first biathlon race of the 2022 Games, the mixed relay, Sean Doherty skied out of the shooting range in second place. Egan was fourth overall in the ski leg of that race. They finished in seventh — tying their best Olympic result in that discipline.

Next up is the 15-kilometer individual race on Monday. The event has five skiing loops and four shooting bouts — two prone and two standing. Unlike other races where the athletes must ski a 150-meter penalty loop for each missed shot, they get a 1-minute penalty for each miss in the individual race, making the shooting especially important.

“I think the most important thing for every biathlon race, but perhaps especially the individual race — the pressure on the shooting does seem higher — is to stay relaxed and happy,” Egan said. “Those are the things I've been trying to focus on.”