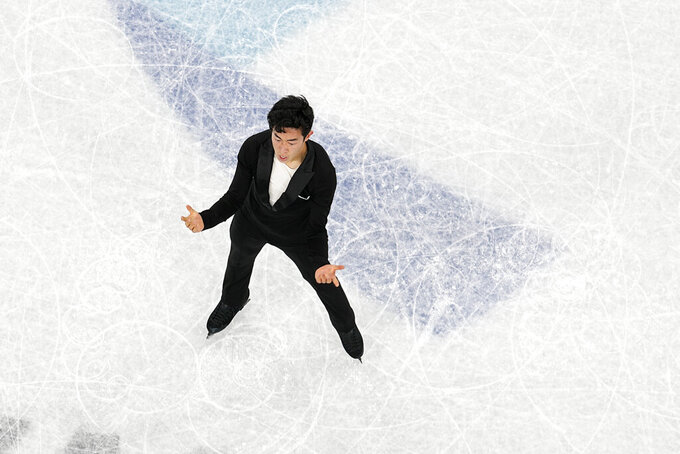 BEIJING (AP) — Nathan Chen stood in the middle of the Olympic rink, bent his arm over his chest and gave a slight bow to the judges, then briskly skated away following his short program during the team competition at the Winter Games.

Yet the way the typically reserved Chen felt after Friday's soaring performance at Capital Indoor Arena, and the way the 22-year-old American felt four years ago in Pyeongchang, was about as different as an axel and a lutz.

He was perfect in Beijing: His massive, opening quad flip to “La Bohème” seemed almost to reach the rafters, his often troublesome triple axel was faultless and the harrowing quad lutz-triple toe loop combination in the middle of the program left him with the second-highest short program score ever in international competition.

He was anything but perfect in Pyeongchang, when a poor short program for the team event bled into a calamitous short program in the individual event, whisking Chen out of medal contention before he felt he'd arrived.

“It's nice to be able to have run-throughs like this,” Chen said after helping the Americans take a two-point lead over the heavily favored Russians following the first of three days in the team event. “Whatever you can take from each practice, good or bad, you take with you, and that's the same thing with competition.”

He might have learned a lesson from the bad in South Korea, but it was good in Beijing.

Chen has been nearly unbeatable since the Pyeongchang Games, winning three consecutive world championships, running his national title streak to six and topping his biggest rival, two-time defending Olympic champion Yuzuru Hanyu of Japan, every time they have stepped on the ice in the same competition.

In fact, Chen's only defeat came at Skate America last fall, when his Olympic teammate Vincent Zhou jumped ahead of him for the gold medal. Chen rebounded by winning Skate Canada with the world's best score for this season.

There's a good chance he could top that mark in Beijing.

His short program during the team event appeared to be flawless, but Chen is the first to admit things can always be even the slightest bit better. He scored 111.71 points, six ahead of reigning Olympic silver medalist Shoma Uno of Japan and just eleven-hundredths off Hanyu's world record, yet was still well short of his own score at nationals in January.

Chen's short program there actually topped 115 points, but it wasn't a record because it wasn't an international event.

The timing of his performance Friday was better, though. It lifted the Americans into first place in the team event, where they have taken bronze at the last two Olympics, and sent a charge through the rest of Team USA.

“I watched Nathan kill it,” American pairs skater Alexa Knierim said, “and if anything, it gave me a bit of excitement and calmness because I felt like our country collectively is ready."

Knierim and her partner, Brandon Frazier, certainly were. They laid down the best short program of their career together, finishing just behind the world-record score of reigning Olympic silver medalists Sui Wenjing and Han Cong of China and the reigning world champions, Russians Anastasia Mishina and Alexandr Galliamov.

Meanwhile, in the rhythm dance, Madison Hubbell and Zachary Donohue stamped themselves as medal contenders with a spectacular Janet Jackson-inspired performance that gave the Americans the maximum 10 points in their discipline.

“We have an incredibly strong team and everyone is the most prepared they have ever been,” said Madison Chock, who along with ice dance partner Evan Bates are the captains of the U.S. team in Beijing.

They also are expected to sub into the team event for Hubbell and Donohue when it's time for the free dance.

“ Our team has great potential and that was demonstrated,” Bates said. "I don’t necessarily think that we feel surprised to be leading the team event. Looking at the roster, we know we have the potential to bring home the gold medal.”

Chen's massive performance, coupled with their finishes in pairs and ice dance, leaves the Americans with 28 points heading into the women's short program on Sunday. The Russians are second with 26 points, while China (21), Japan (20) and Italy (18) put themselves in position to contend for the podium in the free skate.

The top five countries after the women's short program advance to the free skate, with the men kicking things off with their program later Sunday. The medals are awarded Monday following the women, pairs and ice dance.

The biggest question now is whether Chen will perform again in the team event or whether the U.S. substitutes him out — as it did in Pyeongchang — and puts veteran Jason Brown or high-flying Zhou in the free skate.

Each nation that advances can make a maximum of two substitutions to its lineup.

“Either way is cool for me,” said Chen, brushing aside any thought of resting ahead of the individual competition, which begins immediately after the team event and where he will face Hanyu once again. “We have a really strong team, so we have pieces to play with, and whatever is the strongest piece at the time is the strongest piece at that time.”