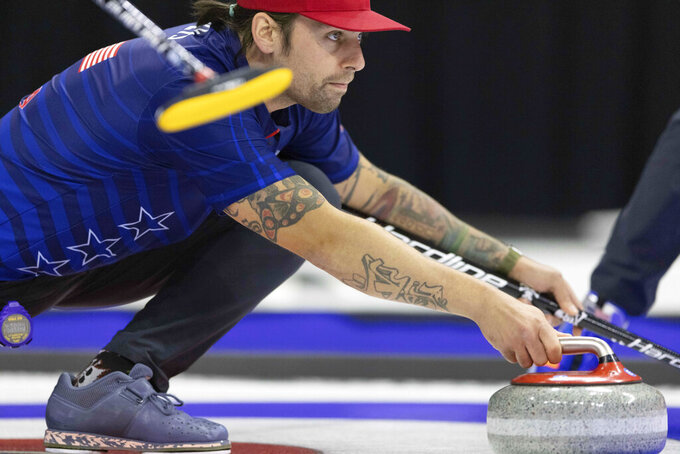 American Chris Plys will have two chances to take home a curling medal from the Beijing Olympics.

The only member of the 2022 U.S. men’s team who wasn’t a part of the gold medal-winning foursome in Pyeongchang, Plys also qualified for the mixed doubles field on Thursday along with Vicky Persinger.

The Americans beat Russia 6-4 at a last-chance qualifying event in the Netherlands. Earlier Thursday, Australia beat South Korea 6-5 to earn the other Olympic berth that was still up for grabs.

Plys had already qualified for his second trip to the Winter Games along with defending Olympic champions John Shuster, Matt Hamilton and John Landsteiner. Persinger will be going to her first Olympics; she has twice finished second at the U.S. trials.

Plys and Persinger will open the Olympics on Feb. 2 — two days before the opening ceremony. The mixed doubles medal round is Feb. 8, a day before Plys will return to the ice with the U.S. men’s team.

In the Netherlands, the Americans took a 5-2 lead into the second-to-last end, the seventh. Persinger had a chance to knock two Russian stones out of the scoring area but hit a guard instead, leaving Anna Sidorova a chance to draw for three points and the tie.

But Sidorova misfired, scoring only two. In the final end, the Russians missed on their last throw, leaving one U.S. stone on target, and the teams bumped fists without the Americans even needing to throw their last rock.

“That seventh end was not a good one for me," Persinger said. "So, we just tried to put it aside and play the best eighth that we could. We made some shots, and now it feels great.”

Tahli Gill and Dean Hewitt are the first Australian curlers ever to qualify for the Olympics. They are coached by Canadian John Morris, who won a gold medal in the men's division in 2010 and another in mixed in 2018.

“The beauty of the Olympic Games is there is a sport for everyone," Australian Olympic Committee CEO Matt Carroll said. “And now we will see young Australians on the world stage in February in a sport many Australians will watch for the first time.”