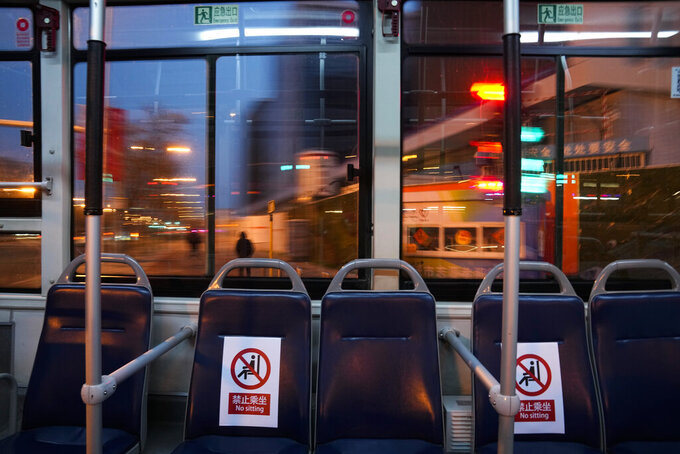 BEIJING (AP) — They did it — that much seems obvious. But what, exactly, was the “it” that they did?

China pulled off a logistically adept Olympics with very few mechanical glitches — no small affair in the pandemic era. It made that happen primarily by creating what it called, in inimitable Chinese government style, a “closed-loop system” — the now-renowned Olympic “bubble” designed to corral anyone affiliated with the Olympics and, just as important, keep them from infecting the rest of the country.

For these Games, the government made sure to put out the nice China. Inside the loop, all was amiable — fronted by young and enthusiastic volunteers, embodied by a cheerful fat panda mascot named Bing Dwen Dwen. The earnest men and women in hazmat suits were friendly, at least as far as one could tell underneath the masks and goggles and full-body plastic. Even the relatively few police encountered inside the bubble were, by Chinese law-enforcement standards, downright chatty.

The closed-loop bubble removed a sizable portion of heart and soul from the 2022 Olympics — a global moment that in the best of circumstances is supposed to be overflowing with both. And here's what it also did: created some convenient side effects that surely didn't displease the Chinese authorities.

First, some background. For decades, the country's Communist Party and government have honed a multipronged system of keeping visitors from seeing — and reporting on — what's really going on across the astonishingly multifaceted nation that is China.

Since the bloody 1989 crackdown on pro-democracy protesters in Beijing's Tiananmen Square in particular, those who try to peer behind the curtain — be they journalists, activists or sometimes just curious tourists — are often blocked, slapped back or redirected to more innocuous locations and pursuits.

Today, international journalists living and working in China — if they're not among those getting kicked out — have a challenging time piercing the official narrative and have to fashion innovative end runs to get at the more contentious topics.

For many years, “foreign affairs offices” in different Chinese cities, ostensibly designed to facilitate things for visitors, have in fact become official impediments in many cases. Many foreigners trying to travel solo to one of the places the central government considers restive — the western regions of Xinjiang and Tibet in particular — might well be thwarted.

And Chinese journalists? In a society where propaganda is positioned as patriotic rather than repugnant, they face perils and pressures that would be hard for anyone who grew up in a democracy to imagine.

So in a way, the Olympic bubble was the perfect microcosm of hide-all-the-blemishes business as usual, set against a globalized, mascot-saturated, winter-wonderland backdrop.

The reason, obviously, was COVID interdiction. But the outcomes are more than aligned with the goals and practices of Xi Jinping's government.

This is not to imply that the bubble was created for anything other than COVID-19 interdiction. Certainly Tokyo had a system last year for its Summer Games that shared some characteristics with Beijing's, though was much less hardcore, reflecting the differing types of governments that Japan and China have.

And as China readily points out, the bubble system worked. As of Saturday, the segregated system that effectively turned Beijing into two cities — one sequestered, one proceeding very much as normal — had produced only 463 positive results out of 1.85 million tests among thousands of visitors entering the bubble since Jan. 23.

“The success in insulating the event from the virus and keeping disruption to sports events to a minimum also reflected the effectiveness and flexibility of China’s overall zero-COVID policies,” the Global Times newspaper, which is pro-government even by Chinese standards, enthused.

So those “authoritarian Olympics” that human rights groups criticized and that some Western governments boycotted (even as they sent their athletes)? The bubble created to host them was, in some ways, not unlike the bubble town that the Marvel character Wanda Maximoff created in last year's popular TV series “WandaVision."

Like the fictional Westview, Bubble Beijing definitely had some things in common with reality, and sometimes you could glimpse the real world from inside. But it was shiny and closely calibrated and — unless you did some serious digging to find the seams — you couldn't really leave until the story played out.

Ultimately, the 2022 Winter Olympics enter the books with two dominant storylines. One is the sports story — a narrative dotted with the triumphs of Eileen Gu and Nathan Chen and Su Yiming, the sadness of Mikaela Shiffrin and the mess that is Russian figure skating.

The other, though, captured from inside that bubble, is the story of the Olympic host country. That one is a pandemic-era tale of apparent medical and logistical triumph on the surface, with a different reality floating below, sanitized for the government's protection and viewed, inevitably, through the COVID-flavored prism of our era — as if through a mask, goggles and a full-body plastic hazmat suit.

Ted Anthony, director of new storytelling and newsroom innovation for The Associated Press, is the AP’s former director of Asia-Pacific news and is covering his seventh Olympics. He lived in Beijing as a child in 1979-80 and as a journalist from 2001-2004. Follow him on Twitter at (http://twitter.com/anthonyted)