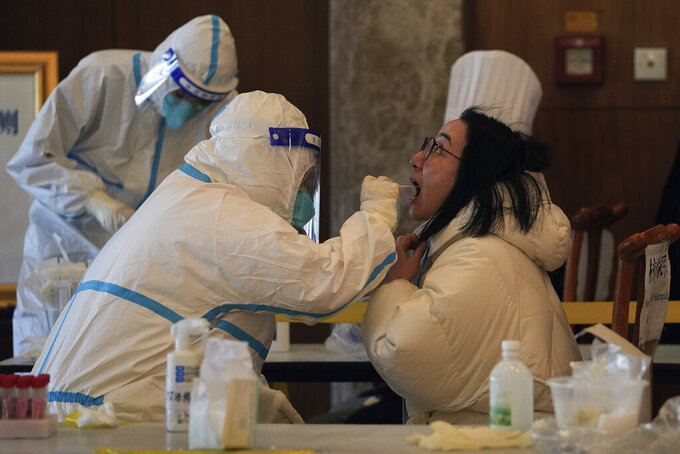 A medical worker collects a sample from a reporter taking part in the Beijing Winter Olympics torch relay activities at a coronavirus test site in Beijing, Wednesday, Feb. 2, 2022. With more than 30 new COVID-19 cases being detected daily ahead of the Beijing Olympics, organizers said Wednesday they aren't worried and expect numbers to drop within days. (AP Photo/Andy Wong)

BEIJING (AP) — Beijing reported three new COVID-19 cases on Wednesday as officials said the virus situation was under control with the Olympic Games set to open later in the week.

The three cases reported in the 24-hour period from Tuesday to Wednesday all involved people under some sort of quarantine.

“The current pandemic situation in the capital is overall controllable and it's headed in a good direction,” said Xu Hejian, a spokesman for the city government, at a daily press briefing. “Beijing is safe.”

The Chinese capital has been on high-alert as it prepares to host the Winter Olympics starting Friday.

Since Jan. 15, Beijing has reported a total of 115 locally transmitted cases of COVID-19, including six cases of the highly contagious omicron variant. In response, the city has mass tested millions of people and sealed off several neighborhoods in different parts of the city while avoiding a strict lockdown for the entire capital.

The restrictions meant that many families had to spend their Lunar New Year's Eve and New Year's Day, which were celebrated on Monday and Tuesday, cooped up in their homes. Local government officials and volunteers sent families packages of fruit, milk and nuts, according to Beijing News, a city-backed newspaper.

China has been able to keep the virus from transmitting widely within its borders through a costly and strict strategy that relies on lockdowns and mass testing.