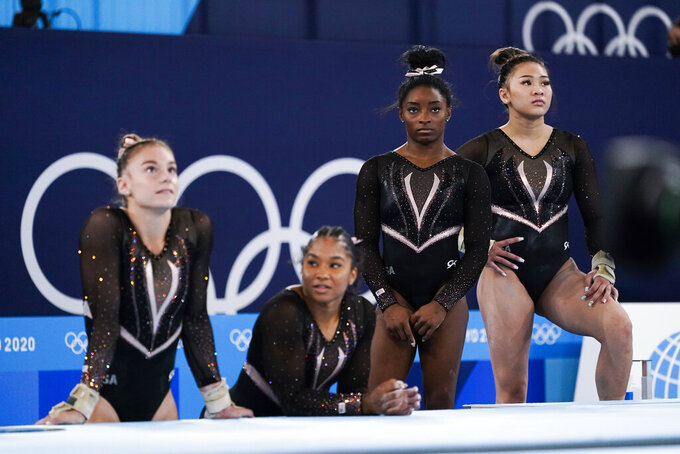 From left, Grace McCallum, Jordan Chiles, Simone Biles, and Sunisa Lee of the United States wait their turn to train on vault for artistic gymnastics at Ariake Gymnastics Centre venue ahead of the 2020 Summer Olympics, Thursday, July 22, 2021, in Tokyo, Japan. (AP Photo/Ashley Landis)

TOKYO (AP) — Two of America's star Olympians headline Sunday's events at the Tokyo Games as Simone Biles and Katie Ledecky both begin their quests to rewrite the record books.

The U.S. men’s basketball team begins play, while surfing makes its Olympic debut and the women's skateboarders see their first action. Here are some things to watch. (all times Eastern):

Five-time Olympic gold medalist Katie Ledecky came to Tokyo attempting to break the all-time record of eight gold medals won by a U.S. woman. The first of her five scheduled events is the women's 400-meter freestyle.

Although Ledecky is considered the best women's distance swimmer in the world, she is expected to face a fierce challenge from Ariarne Titmus of Australia. Ledecky has won six total medals in her first two Olympics and she won her first gold medal at the London Games in 2012 when she was just 15 years old.

In men's competition, two-time Olympic gold medalist Caeleb Dressel is expected to be part of the 4x100m freestyle relay. Dressel is thought to be the successor to Michael Phelps and won a record eight medals at the 2019 world meet. Other swimming medals will be awarded in the women's 100 meter butterfly and the men's 100 meter breaststroke. Live coverage begins at 9:30 p.m. on NBC.

WAKE UP FOR SIMONE

Sunisa Lee, who edged Biles in the all-around during the second night of Olympic Trials, and teammate Jordan Chiles will likely challenge each other for the Americans' second spot in the all-around finals. Grace McCallum rounds out the four-woman U.S. team while MyKayla Skinner and Jade Carey will compete as individuals.

The Americans are heavily favored to win a third straight Olympic title and qualifying will be streamed on Peacock at 2:10 a.m.

Team USA will have its full 12-man roster when it opens play against France.

Khris Middleton and Jrue Holiday from the newly crowned champion Milwaukee Bucks and Devin Booker from the runner-up Phoenix Suns arrived in Tokyo a day before the Americans began their quest for a fourth consecutive gold medal.

Team USA is headlined by Kevin Durant, Jayson Tatum, Draymond Green and Booker. The first game is live at 8 a.m. on Peacock with later encore showings on NBC and NBC Sports Network.

One of four new sports added to the Tokyo Games is surfing, which is scheduled to begin Sunday but will be dependent on weather conditions.

Surfing made it into the games through nearly 25 years of lobbying by the International Surfing Association. But the efforts actually date to the 1912 Summer Games in Stockholm when five-time swimming medalist Duke Kahanamoku, a Hawaiian icon considered a modern surfing pioneer, first pushed for it to become an Olympic sport.

Carissa Moore of the United States is the reigning world champion and competition will be aired on USA Network during coverage that begins at 8:30 a.m. through 5:30 p.m.

FOR THE NIGHT OWLS

The insomniacs have a full slate of competition ranging from the skateboarding women's final as NBC's coverage runs until 2 a.m.

The U.S. women's water polo team faces China at 1 a.m. on USA Network, which will also air 3-on-3 basketball, and Canada vs. Germany in women’s beach volleyball.

The late night coverage on CNBC runs until 2 a.m. and includes the men's rugby qualifying, an elimination round of archery and a men's basketball game between Argentina and Slovenia.