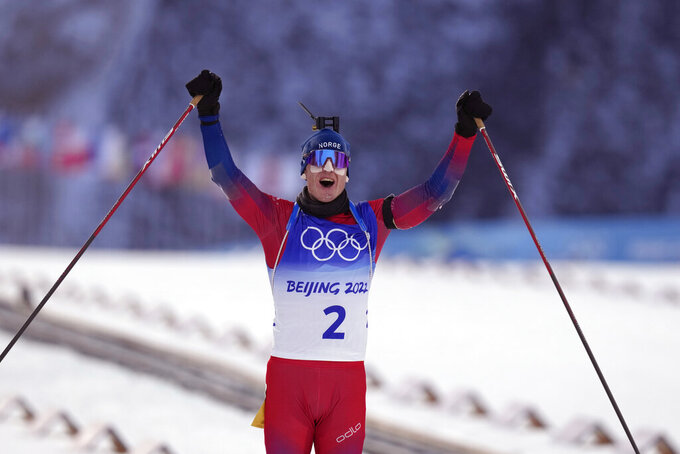 ZHANGJIAKOU, China (AP) — The penalty loops piled up as the wind wreaked havoc on the biathlon course. The two that handled it best — with the sharpest shooting and the fastest skiing — were rewarded with Olympic gold medals.

“The key moment was my second prone when I shot clean and I went out in front,” said Boe, who is also from Norway. “And then I made the gap I wanted and from there I never looked back.”

Clean shooting through the four stops on the range was the key in both races for all of the medalists. Both Boe and Braisaz-Bouchet missed only four targets in their victories, while many others were forced to take five, seven or even 10 penalty loops in the cross-country skiing part of the event.

“It was really hard in the shooting in the race today,” said Martin Ponsiluoma of Sweden, who only missed two targets and ended up with silver behind Boe. “My shooting was really good today and my skiing was good. I just had to push the last loop alone and I was second, so I’m really happy.”

Boe's gold was his fifth medal of the Beijing Games. He also won gold in two relays and in the 10-kilometer sprint. He earned bronze in the 20-kilometer individual.

Boe threw his arms in the air as he crossed the line in 38 minutes, 14.4 seconds. Ponsiluoma finished 40.3 seconds later and Vetle Sjaastad Christiansen of Norway took bronze after missing only three shots — none in the last shooting stop.

French biathlete Quentin Fillon Maillet, who already has won five medals at the Beijing Games, entered the race as one of the favorites but his five missed shots — three in the last standing — set him back. He finished fourth.

Braisaz-Bouchet missed three shots early in the women's race but only one more toward the end, allowing her to move out front and stay out front. She ended up winning gold in 40:18.

“I was really, really calm, actually, on the second part of the race," Braisaz-Bouchet said. “I said ‘OK, I have good feelings on the track, I’m leading the race, the mass start, and just focus on my own race.’ I just took it step by step, and when I arrived at the shooting, I had my mind totally free and empty.”

Roeiseland became the second biathlete, male or female, to win a medal in all four individual events at an Olympics, joining Bjoerndalen. She also won gold in the mixed relay.

The women’s competition was moved forward from Saturday to Friday, just before the men’s race, because of cold temperatures and high winds in the forecast. It was minus 13 degrees C (8.6 degrees F) at the range Friday for both races with strong wind sending the flags flying sideways.

The brutal wind and cold has taken a toll on the athletes. Most wore tape on their faces to protect against the wind and many had frost crested around their mouths at the end.

In most longer races, many elite athletes will shoot clean while others may miss one or two. But in Friday's windy races, no one cleaned all four bouts and many had six to eight misses.

Eckhoff and Roeiseland missed two targets each in their last bout and left the range together, 48 seconds behind Braisaz-Bouchet. Eckhoff chased hard and crossed the line 15.3 seconds after the Frenchwoman.

During Eckhoff's third shooting, wind gusts hammered the range and she paused for a long time before taking her first shot, fearing she might repeat the five misses she had in the last race.

“I was thinking, ‘It’s going to happen the same as the relay.’ But I had a good mindset and I changed things up," she said. "I tried bending the knees and I tried moving my weight onto my heels and that helped.

"I’m so happy to just have two mistakes on that shooting. It could easily have been five as well.”

Roeiseland also paused while waiting to adjust to the conditions.

“It was so much wind," Roeiseland said. "Tiril and I stand there together (waiting to shoot). I heard she was breathing and I was breathing and we were like, ‘OK, maybe it (the wind) will be a bit better soon.’ It was still blowing a lot and I didn’t know what to do so I tried to shoot and I had two times the loop, but I think that was OK today.”