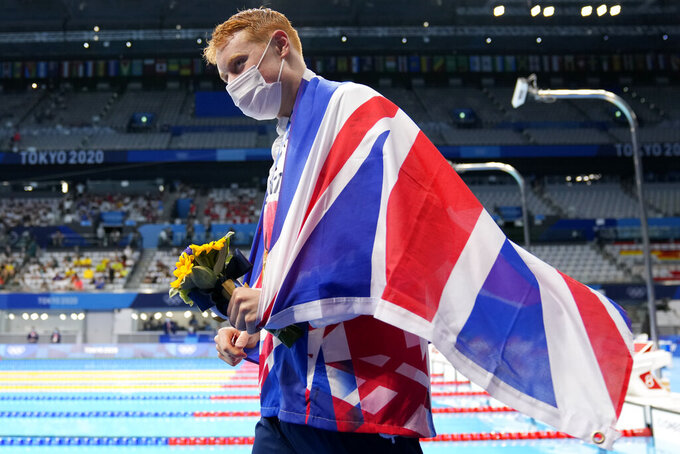 TOKYO (AP) — Britain's Tom Dean contracted COVID-19 not once but twice in the run-up to the Olympics, leaving him doubting he'd make it to the national trials, never mind Tokyo.

He made it to both and much, much more, winning gold in the 200-meter freestyle on Tuesday and leading an historic 1-2 in swimming for Team GB as teammate Duncan Scott took silver.

"This is the single greatest achievement of my life," Dean said.

It was also Britain's first 1-2 finish in the pool at the Olympics in over 100 years, since the 1908 Games in London.

Dean wasn't sure that kind of swim would be possible for him in January, when he got COVID for a second time in four months. His cardiovascular system was hit, his lungs hurt and he couldn't stop coughing, he said. Training obviously came grinding to a halt as he had to stay in quarantine in his apartment.

The April trials were just three months away.

"The Olympic gold was a million miles away," he said.

“It’s amazing. It’s a dream come true having a gold around my neck.”

Countless Olympians have stories to tell about how the pandemic has intruded on their preparations for Tokyo and made it so much tougher than normal. But few have felt the effects of the illness as directly as Dean did — twice.

And even after the immediate symptoms subsided from his second infection in January, he couldn't get straight back into the pool because of the lingering effects on his body. He was out of the pool for six to seven weeks, he said, trying to regain his strength.

“I’m thinking how am I going to be able to recover from this in time to get a solid block of work done before the Olympic trials?" he said. “It was tough kind of wrapping my head around that during an Olympic year.

“It wasn’t life-threatening ... but when you are doing a sport that is quite heavy on the cardio-vascular system, and you can see it’s affecting your lungs, you're coughing and all that stuff, you’re a little bit worried about how you’re going to build back in."

The 21-year-old Dean feared his chance at an Olympic debut was gone but credited coach David McNulty for calming him down, and then building him back up again.

Dean's victory was a surprise within Team GB, with teammate Scott tipped as the likelier gold-medal chance out of the two of them. Dean edged out Scott by just four-hundredths of a second, and also took the British record off Scott.

“He’s got big arms does Dean-o so you’d probably have to be several meters in front to touch him out,” said Scott, who handled his disappointment with grace.

“It was great. With what’s he’s (Dean) been through this year, it’s special.”