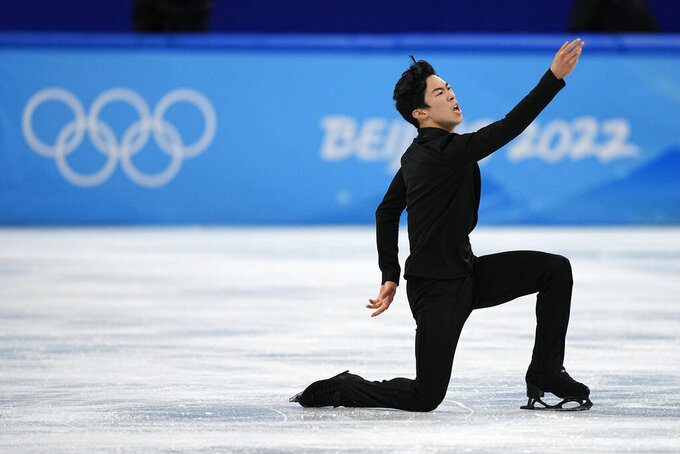 BEIJING (AP) — Nathan Chen had just shattered the world record for a figure skating short program, even throwing a defiant fist in a rare display of emotion, when he was asked how he'd spend the next 48 hours before his long-awaited Olympic coronation.

“I've been here a while,” the 22-year-old American star replied with a shrug Tuesday. “I've got some clothes to wash. Some other things to clean around my room. Just ordinary chores, really. Nothing crazy.”

He left the crazy — the downright stunning — on the ice of Beijing's historic Capital Indoor Stadium.

Wearing a confident smirk, Chen avenged his poor short program from four years ago at the Pyeongchang Games in the biggest way possible. He opened with a perfect quad flip, breezed through his often-vexing triple axel, then drilled his quad lutz-triple toe loop combination before skating to a stop and delivering a right haymaker at the air.

“I was just elated,” said Chen, who helped the U.S. win team silver earlier this week. “At the last Olympics, both of the short programs didn't go the way I wanted. To finally get an opportunity to skate the programs I wanted feels really good.”

Kagiyama drilled a pair of quads and a triple axel during his own dynamic short program to finish with 108.12 points, while fellow Japanese skater Shoma Uno — the reigning Olympic silver medalist — was third with 105.90 points.

As for their longtime idol, Hanyu bailed out of his planned opening quad salchow and received no points for the jump, a massive mistake that cost the two-time defending Olympic champion a shot at a third gold medal. Hanyu finished in eighth place with 95.15 points, a deficit so great that not even his planned quad axel in the free skate can make it up.

“I feel really shocked,” said Hanyu, adding his skate may have hit a hole in the ice, “but I have one more chance.”

The showdown between Chen and Hanyu had been building toward Tuesday for the past four years, ever since what Chen called a “disastrous” short program in Pyeongchang took him out of medal contention before he felt he had arrived.

Rather than taking a break afterward, Chen doubled down, working tirelessly with longtime coach Rafael Arutyunyan while simultaneously working toward his degree from Yale. He sharpened every aspect of his figure skating, from technical marks to his artistry, and he began to put together programs that nobody else had the nerve to try.

The short program he nailed in Beijing, with a base value of 36.27 points, was the hardest ever tried in competition.

It left those watching back in the U.S., including 1984 Olympic champion Scott Hamilton, marveling at his ability.

“I have probably said it no less than a thousand times over the past four years — but I'll say it again — when Nathan Chen is on his game, he is virtually unbeatable," Hamilton said.

Chen's ferociously steady build toward his second Olympics, a stretch that included three world titles and the most recent of his six national championships, contrasted starkly with the bumpy, injury-filled path that Hanyu took to Beijing.

But just when it appeared that Kagiyama and Uno had surpassed him, the 27-year-old Hanyu showed up at the Japanese championships in December and regained his crown, and his long-awaited showdown with Chen was on for Beijing.

It lasted about as long as it takes to lace up skates.

The preternaturally poised Hanyu, skating well before Chen, was seconds into his program when he set up for the first of two planned quads. But something was amiss the moment he took off, and Hanyu bailed out of the salchow to an audible gasp from the carefully separated crowd of a few thousand people.

The quad salchow carries a base value of 9.70 points; Hanyu was given none of them.

“Knowing how it feels to skate — not necessarily to your potential but not what you anticipate skating — it doesn't feel great, especially at an Olympics,” said Chen, who can relate as well as anyone. “But you can never count Yuzu out. He's a two-time Olympic champion, and no matter what he does in the future, he’s always going to be a figure skating icon.”

As if to drive home Hanyu's extraordinary misstep, though, Uno was next on the ice and performed flawlessly. He landed his opening quad flip, then made a quad toe loop-triple toe loop combination look easy. And by the time Uno finished his program, set to a Vivaldi concerto, he had amassed 105.90 points and taken over first place.

“I had a chance to skate the short program for the team,” said Uno, part of the bronze-winning Japanese squad, “and I think the experience helped me on this individual skate. I made some errors on jumps but I performed better.”

Kagiyama gave Japan a second medal contender heading into Thursday when he landed his opening quad salchow and a quad toe loop-triple toe loop, then skated perfectly the rest of the way to “When You're Smiling” by Michael Buble.

“This is my first Olympic Games and to be honest with you, I thought I would be very nervous from beginning to end,” he said. “I just thought I was having fun skating, and as for the jumps — I can't complain. My legs were giving up on me, a little minus for me if I was to score myself, but everything else was quite good.”