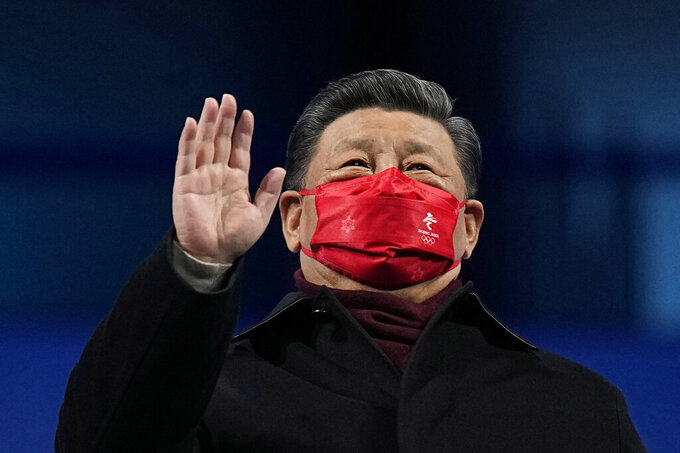 FILE - Chinese President Xi Jinping waves during the closing ceremony of the 2022 Winter Olympics on Feb. 20, 2022, in Beijing. The just-concluded Winter Olympics weren’t China's big event of the year, internally, at least. For the Communist Party, that comes this fall at a major meeting that will likely cement Xi Jinping's position as one of the nation's most powerful leaders in its seven decades of Communist rule. (AP Photo/Jae C. Hong, File)

BEIJING (AP) — The just-concluded Winter Olympics weren’t China’s big event of the year — internally, at least. For the Communist Party, that comes this fall at a major meeting that will likely cement Xi Jinping 's position as one of the nation's most powerful leaders in its seven decades of Communist rule.

The party congress, held every five years, is expected to appoint Xi to a third five-year term as its leader, breaking with recent past practice that limited the top person to 10 years in power. That would pave the way for him to get a third term as China's president at the following year's annual meeting of the legislature.

For China's 1.4 billion people and the rest of the world, Xi's tightening grip on power signals at least a partial return to the cult of personality that characterized the rule of Mao Zedong, who led Communist China from its founding in 1949 until his death in 1976, and that the party had moved away from after the disaster of Mao's Cultural Revolution.

“The 20th Party Congress will be extremely important even though and maybe because there will be no leadership change,” said Bonnie Glaser, the director of the Asia Program at the German Marshall Fund of the United States. “Xi Jinping will likely lay out his priority agenda, which will provide insights into the legacy items he hopes to achieve.”

An overarching goal, which predates Xi, is to “rejuvenate” China, to build it into a strong nation that will be on equal footing with other major countries. Xi has sought to accelerate that process, making it a central part of his mandate and expanding China's global role.

His Belt and Road Initiative has built ports, railways and other infrastructure around the world. Chinese vaccines and other pandemic-related goods have followed. China's foreign policy has become more muscular as it uses growing military strength to stake out claims to territory in the Pacific and rejects Western critiques of the Communist Party's authoritarian ways.

While China remains a middle-income country on a per-person basis, Xi seems to be saying the time has come for the world's second-largest economy to stand up as an equal in international affairs.

That attitude was on display at the Winter Olympics, which wrapped up in Beijing on Sunday. China held the Games on its own terms, publicly dismissing a diplomatic boycott led by the United States over China's human rights record.

It still got leaders from about 20 countries to attend the opening ceremony, most prominently Russia's Vladimir Putin, who is finding common ground with Xi in the face of his own differences with America. Others came from Mongolia, Argentina, Ecuador, the United Arab Emirates, Kazakhstan and other central Asian nations.

Calls from human rights groups for the International Olympic Committee to hold the Games outside of China and for corporate sponsors to withdraw support fell on deaf ears.

Glaser said that while the diplomatic boycott sent an important signal of growing concern, "more collective action by a larger community of nations is needed, and it remains to be seen whether China’s policies can be influenced on human rights.”

The party congress brings together 2,300 delegates who hear reports and nominally elect their leaders. In reality, the names are carefully vetted and the outcomes decided by negotiations among those at the top.

At the end, the handful of members of a new standing committee — the very top of the party leadership — appear on stage, revealing who they are for the first time.

Notably, the standing committee that appeared at the last congress in 2017 did not include an obvious successor to Xi, raising speculation that he did not intend to step down in 2022.

That speculation was confirmed when Xi, at a meeting of the legislature the next year, had lawmakers abolish a two-term limit on the office of president, opening the way for him to remain the head of state for more than 10 years. There is no official limit on the party leadership.

Another cornerstone of Xi's rule: strengthening the Communist Party by pushing patriotism and patriotic studies, putting the party's role at the center of China's achievements and quashing any dissent through online censorship, detentions and arrests.

The future of both the party and the nation have become deeply intertwined in party statements that say the path to China's “rejuvenation" depends on the party and Xi himself.

The Communist Party has defined his ideas, known as “Xi Jinping Thought," as a guiding principle and recognized his “core” role, saying both are “of decisive significance for advancing the cause of the Party and the country ... and for driving forward the historic process of national rejuvenation.”

Xi delivered a more than three-hour speech at the 2017 congress in which he laid out his vision for building China into a country that is prosperous, strong and "harmonious" by the middle of the 21st century, when the party hopes to mark 100 years of Communist rule.

“Achieving national rejuvenation will be no walk in the park. It will take more than drum beating and gong clanging to get there,” he said. “Every one of us in the party must be prepared to work even harder toward this goal.”

Barring any surprises, this fall's party congress will likely affirm Xi's stature as one of the three most dominant leaders of China's Communist era, along with Mao and Deng Xiaoping, who launched an opening up of the country in 1978 that led to its meteoric economic rise.

While some have speculated Xi is setting himself up to rule for life, the 68-year-old leader has given no public indication of his plans.

Ken Moritsugu is Greater China news director for The Associated Press. Follow him on Twitter at http://twitter.com/kmorit